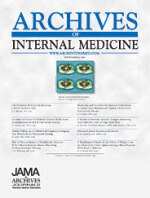 by Lynn Shapiro, Writer
The majority of men receiving PSA tests for prostate cancer may not be receiving adequate information before deciding whether to be screened, and whether to undergo surgery if cancer is spotted, two papers published in the September 28 issue of the Archives of Internal Medicine conclude.

The first study found that among 375 men surveyed, only 69.9 percent had discussed the ramifications of having a PSA test with their physicians, says Richard Hoffman, M.D., M.P.H., of the New Mexico VA Health Care System and the University of New Mexico.

Hoffman said that while 93.9 percent of the men who did speak to their doctors said they were told of the test's benefits, only 32 percent of these men had been told about the potential downsides of treatment.

Most of the men surveyed believed that surgery reduced mortality rates. In fact, Dr. Hoffman writes, many prostate cancers are slow-growing and never spread, so that surgery appears to offer "only a modest survival benefit." He notes that the majority of men undergoing surgery will suffer from impotence and incontinence.

Men "need a greater level of involvement in screening discussions and to be better informed about prostate cancer screening issues," Dr. Hoffman concludes.

In an accompanying editorial to his article, Steven Woolf, M.D., M.P.H., and Alex Krist, M.D., M.P.H., of Virginia Commonwealth University in Richmond, said health care professionals "should use decision aids and other tools to help patients obtain accurate, evidence-based information about the advantages and disadvantages of testing.

"Treatment of early-stage prostate cancer results in impotence, incontinence, or both in about 50 percent of men," the physicians write in their editorial, noting that left alone, the cancer may not cause any problems.

In the second study on this topic in the Archives, Kirsten Howard, Ph.D., M.P.H., of the University of Sydney and colleagues found that screening increases the chance of being diagnosed with prostate cancer from 23 per 1,000 men to 53 per 1,000 men over a 10 year period.

The number of men with treatment-related impotence or incontinence is also twice as common: about 26 percent versus 12 percent, while the chance of death from prostate cancer is reduced only slightly from four in 1,000 men to 3 in 1,000 men," Howard and her colleagues conclude.

Men having PSA tests need to be given this information before deciding whether to have surgery, Howard writes.