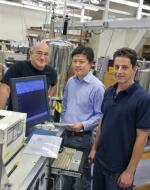 Alex Pines, Xin Zhou
and Dominic Graziani,
(from left) developed a technique
that could allow MRI scanners
to do molecular imaging studies

by Brendon Nafziger, DOTmed News Associate Editor
In the race to make MRI technology suitable for molecular imaging studies, one lab gets a step closer thanks to a technique involving the reconstruction of MR images using captured xenon gas.

Next, the patient would exhale and the tagged gas particles, bound to the biomarker-bearing biosensors, would leave the body and be gathered in a bag or some other container. They would then be processed and because the magnetic coordinates for each particle are unique they could be used to reconstruct the exact location of the particles in the body and reassemble a spatially accurate image from the scan -- but with sensitivity to the biomarkers orders of magnitude greater than before.

Clinical applications are some years away, according to Graziani. For their experiments, the Berkeley team didn't use living subjects, but rather a mechanical set-up meant to mimic human respiration, with membranes to act as lungs and flowing water to act as circulating blood delivering the xenon to different parts of the body.

Graziani says after these proof-of-concept studies, the real challenge is signal enhancement. "We are currently testing a second-generation design in which we compress the extracted gas before detection to see how far we can push the sensitivity gains," he says.

As for its true value in the field, it all depends on the xenon biosensor. Right now, Pines' lab is in the planning stages on animal studies to see how effective they are in real-world situations. If those go well, they could move to Hyper-SAGE animal models in a few years. But actual "point-of-care diagnostics is a much longer-term goal," Graziani cautions. "It would require the miniaturization of many of the components involved in the experiment."