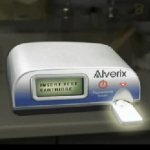 Alverix is an innovator
in point-of-care testing

Alverix develops and manufactures instruments for point-of-care (POC) testing for things like the flu or drugs of abuse in employment screening. The company's hand-held devices have many other potential applications also and promise the functionality of much larger and more costly bench-top lab equipment.

The company's intellectual property has quite a pedigree with notable scientists including optical mouse inventor Tong Xie on the company's development team. Alverix is working with various development partners to serve broader POC markets with an instrument platform based on optical electronic image acquisition.

"Essentially we take a picture of the test site and use software, firmware and algorithms that analyze that picture to determine if the picture is normal or abnormal," explained CEO Ric Tarbox. "We can look at any sample--blood, urine, a swab from the back of the nose for flu testing, any bodily fluids."

The image-based technology also incorporates powerful real time wireless data management. This can be used to track epidemics, or incorporate into patient records or even business records.

"Think about a situation where in the future you want to do a test at home. Let's say you have a chronic disease and you have to test yourself regularly. You use the device at home and do the test. It might take 3-10 minutes depending on the incubation in the test. And then as soon as the test is done, it's sent securely to a computer and to your physician," Tarbox said.

The timely reporting can support timely treatment. The data can also populate hospital and billing systems. And there are business implications for this type of instrument self-reporting of their usage.

"It also could help with compensation for sales reps. Manufacturers today sell through large distributors and at that point they lose track of where their product is because those large distributors ship it around the country and then to the end users," Tarbox explained. With our system they would have real time access to test utilization data by instrument."

Customers for the futuristic devices include hospitals for bedside testing or ER, outreach clinics, physicians' offices, convenience clinics such as in chain pharmacies, and ultimately the patient's home. Another application would be in international markets for field health screenings in developing countries.

"In the U.S., health care reform calls for a reduction in cost of diagnostic testing. One of the biggest problems with doing diagnostic testing in a central laboratory is the cost associated with getting the sample to the lab, the overhead costs, instrumentation, and labor," Tarbox said. "Even though the cost per unit for home use is higher than buying core lab tests in volume, the fact that you don't have all the labor and overhead associated with POC testing reduces the total cost of delivery. So that alone is a major part of the opportunity for this segment of the market to grow. Also, the convenience and patients' desire to take control of their own health by testing themselves."

The applications seem endless such as tests for infectious disease, cardiac markers like cholesterol and lipids, clotting risk factors, upper respiratory diseases, hemoglobin, and other areas where intervention can be informed by timely testing, as well as in pathology and many other specialties.

Manufacturing for Alverix is being done in Malaysia and electronic and imaging components for the device are sourced throughout Asia.

Compared to the competition, Alverix's device is a fully functioning imaging system in the palm of the user's hand, promising an unprecedented level of accuracy from a small device.

"We believe we can get performance from our instrument that is equivalent to any bench-top POC diagnostic instrument today," Tarbox said. "We continue to work with our partners including assay makers to optimize performance of the device and drive down cost of POC testing."

Alverix was once part of Hewlett Packard and later spun off from Agilent/Avago in 2007. Chief Technology Officer Tong Xie and his team include mechanical and electrical engineers, and software developers.