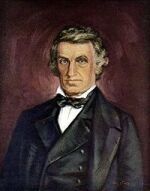 Dr. Beaumont and "the man with the lid on his stomach"

For centuries, the process of gastric digestion puzzled doctors and scientists far and wide. Many hungered for the ability to open a door and peek into a live human stomach, observing digestion as it happened. But one man, Dr. William Beaumont, literally snagged the seemingly far-fetched opportunity, securing the coveted place in history as father of gastric physiology.


Commenting on 18th century physiologists of his day, the Scottish anatomist and physician Dr. William Hunter lectured, “…to account for digestion, some [physiologists] have made the stomach a mill; some would have it to be a stewing pot; and some a wort-trough. Yet, all the while, one would have thought that it must have been very evident that the stomach was neither a mill; nor a stewing pot; nor a wort-trough; nor anything but a stomach.”

Enter the stomach that would go down in history, in a fortunately unfortunate turn of events. On June 6, 1822, the famed stomach, belonging to 28-year-old Alexis St. Martin -- a French Canadian voyageur and fur trader – sustained an accidental duck shot, after which he lay dying on the floor of his workplace, the American Fur Company on Mackinac Island in Michigan's Lake Huron.

Rushing to his side was Beaumont, a U.S. Army surgeon serving at nearby Fort Mackinac. Although he predicted St. Martin would survive no more than 36 hours and noted that he “considered any attempt to save [St. Martin’s] life entirely useless," Beaumont treated the musket wound, restoring his patient back to health. At this point, the two men would have gone their separate ways, but as St. Martin’s wound healed, it left behind a hole large enough to insert an entire forefinger into his stomach’s cavity. Aside from the open gastric fistula, St. Martin’s health was top-notch; he simply plugged up the hole with a piece of cloth and got on with his day. This was the first time such a perfect, long-term recovery had occurred with a permanent stomach opening.

An opportunistic Beaumont did not hesitate to take advantage of this unique situation. In 1825, he allegedly tricked the illiterate St. Martin into signing a contract permitting him to execute experiments on the poor fellow’s stomach. The U.S. Army supported Beaumont’s research, making him a sergeant and upping his salary to ease the physician’s financial burden. Beaumont also paid St. Martin to work as a handyman for him on the side.

For nearly eleven years after St. Martin’s accident, Beaumont continued to observe his patient intermittently and brought him along to various Army posts with him, including Fort Niagara, N.Y. and Fort Crawford, Wis. Later, he used a six-month leave of absence to take St. Martin to Washington, D.C. for an extensive series of experiments.

Along with observing normal digestion, Beaumont examined the effects of weather, exercise and even emotions on the digestive process. His methods involved inserting string-suspended food into St. Martin’s fistula and withdrawing it one, two and three hours later to analyze the digestion process of different foods at various stages. The quarter ounce pieces of food comprised of raw beef, raw pork, stale bread, raw cabbage, and on one occasion he placed twelve raw oysters directly in St. Martin’s stomach. He chemically analyzed samples of St. Martin’s gastric juices, both in and outside of his stomach in test tubes; this led him to discover that gastric juice requires heat to digest -- proving digestion is primarily a chemical process and not mechanical.

Coincidentally, prior to St. Martin, Beaumont had no formal training in physiology or gastroenterology. Born November 21, 1785 into a Lebanon, Conn.-based farming family, Beaumont decided to pursue medicine aged 25. After two years as a physician's apprentice under Dr. Benjamin Chandler and Dr. Truman Powell in St. Albans, Vt., the Third Medical Society of Vermont certified him to practice “Physic and Surgery” in June 1812. Soon after, Beaumont enlisted as a U.S. Army surgeon's mate in the War of 1812 and was assigned to the Sixth Infantry Regiment in Plattsburgh, N.Y. until 1815. It was as a post surgeon in the Army where he fatefully encountered St. Martin years later.

Some deem Beaumont’s tests ethically questionable. Mocking crowds nicknamed St. Martin “the man with the lid on his stomach,” and a 1953 article in the Milwaukee Journal reports that Beaumont “lifted [St. Martin’s] lid hundreds of times to make amazing discoveries about the processes of digestion.” St. Martin would periodically disappear and experiments often left him irritable and stressed. In his own journal, Beaumont recorded St. Martin “complaining of considerable distress and uneasiness at the stomach, general debility and lassitude, with some pain in his head.” St. Martin, though, must have been aware of his value to Beaumont. In 1832, the physician wanted St. Martin to sign a one-year contract – he wouldn’t comply until Beaumont agreed to pay him at least $150, along with room, board and clothing as part of the deal, which stated that St. Martin was to “obey, suffer and comply with all reasonable and proper orders or experiments.” In May 1833, after the death of one of St. Martin’s children, he left for Canada and they never saw each other again.

Fortunately, it wasn’t all for nothing. Eventually, the experiments led to Beaumont's Experiments and Observations on the Gastric Juice and the Physiology of Digestion (1833) a book that had a powerful influence back in the medical centers of Europe.

Sir Andrew Combe, an English physiologist, said of Beaumont, “…singularly favorable as Dr. Beaumont's opportunities were, he has made no original discovery in the physiology of digestion. To a certain extent this is true, for in the proper sense of the word he has not made and does not claim to have made any discovery, but he has done what is at least equally essential for practical purposes.”

The more traditional viewpoint, however, is that Beaumont and his often-reluctant guinea pig, established major milestones to our understanding of the digestive process, including studies of gastric motility; gastric acidity and the importance of hydrochloric acid; and neurogenic influences on digestion.

Beaumont died on April 25, 1853, after slipping on an icy step and hitting his head. He is the namesake of Beaumont Hospital in Royal Oak, Mich., and the Beaumont Army Medical Center in El Paso, Texas. St. Martin died aged 86 in St. Thomas de Joliette, Canada. The Canadian Physiological Society placed a plaque near his grave stating: “Through his affliction, he served all humanity.”