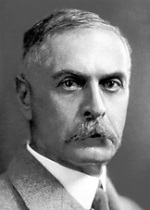 Learning the A,B,Cs of blood types

by Loren Bonner, DOTmed News Online Editor
Proper blood transfusions were first performed on a large scale during World War I, and only possible, in part, because of a breakthrough years earlier. In 1901, Karl Landsteiner discovered the major human blood groups and subsequently developed the ABO system of blood typing. Before Landsteiner’s discovery, doctors didn’t know blood given to a patient had to be compatible.

This month in medical history, we pay tribute to Landsteiner, considered the father of transfusion medicine. Born in Vienna on June 14, 1868, Landsteiner quickly earned a place in the scientific and medical fields. He studied medicine at the University of Vienna and graduated in 1891 at the ripe age of 23. That same year, he published a paper on the influence of diet on the composition of blood ash, before going to work in various chemistry labs in Munich. In one of these labs, he met his mentor, Ernst Ludwig. Under Ludwig, Landsteiner began solving medical problems using a chemist’s eye, an approach he would utilize throughout his career.

In 1896, Landsteiner returned to Vienna and was hired at the Vienna Institute of Pathology to perform autopsies. But he was more interested in immunology and serology and studied these subjects on his own time. In 1900, he wrote a paper about his observations on the clumping of one person’s blood with another’s. He attributed this occurrence to the unique nature of an individual’s blood, not with pathology, the common belief at the time. Previous attempts at blood transfusions resulted in adverse reactions in patients such as shock, jaundice and haemoglobinuria, a condition in which there is a high concentration of the protein hemoglobin in a person’s urine.

In most cases, Landsteiner thought blood could be separated into three groups. He identified them according to varying antigens, or sugar-containing substances, attached to the plasma membrane of the red blood cells. This accounts for the three groups he named: A, B and C, The third group C (later referred to as O), was lacking in A or B antigens. Shortly after Landsteiner’s discovery, colleagues of Landsteiner’s identified another blood group, which became known as the rare AB blood type.

Landsteiner was appointed a member of the Imperial Society of Physicians in Vienna in 1902, and around this same time, his work with blood typing gained recognition for how it could solve legal cases involving questions of paternity, as well as certain criminal suits. Landsteiner and Max Richter of the Vienna University Institute of Forensic Medicine are well-known for the lecture they gave on a novel methodology using blood typing to help solve crimes where dried blood is left at a crime scene.

However, Landsteiner didn’t stay in Vienna for long. World War I had changed the city and so he moved elsewhere — where conditions were more favorable — to pursue his work. In Holland, he accepted a post in a small hospital and worked on something known as haptens, which were influential in the development of immunology.

In 1922, Landsteiner moved to New York City and took a position at the Rockefeller Institute for Medical Research. This is where he carried out much of his later work on blood groups and immunology. In collaboration with Philip Levine and Alexander Wiener, Landsteiner discovered the Rh-factor in blood, which relates human blood to that of the Rhesus monkey, and contributed greatly to the growing body of research for transfusion medicine. The discovery of the Rh factor, either as positive or negative, completed the blood grouping strategy that transfusions are based on today.

In 1930, Landsteiner won the Nobel Prize for Physiology or Medicine for his discovery of the major blood groups and the development of the ABO system of blood typing. Landsteiner died on June 26, 1943, of a heart attack while working in his laboratory in New York. He was 74 years old.