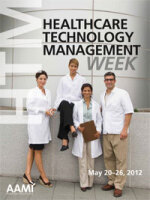 Biomeds urged to 'think beyond the basement'

by Brendon Nafziger, DOTmed News Associate Editor
James Keller, the vice president of health technology evaluation and safety with ECRI Institute, said he earned the title of "unsung hero" during his high school wrestling days, presumably because he was a good if not always widely noticed wrestler. But he believes that biomedical equipment technicians have to escape from a similar label.

In a webinar hosted Wednesday by AAMI and ECRI Institute in honor of Healthcare Technology Management Week, Keller and other speakers urged biomeds to cultivate a leadership mindset and learn to speak in the language of the C-suite in order to gain more respect for their efforts.

They also suggested biomeds see their job as more than repairing medical equipment. Instead, the role of the biomed, or healthcare technology manager, should encompass technology asset management, vendor service contract negotiations and closer dealings with IT departments to integrate medical devices with electronic medical records and computer networks.

"Often [HTMs have] been considered the 'unsung heroes' in the hospital," Keller said at the meeting. "They play a pivotal and critical role in hospital operations but for sure, in many cases at least, they don't get the recognition from" doctors, nurses and chief executives that they deserve.

Mary Logan, AAMI's president, said the question her group most often hears from biomeds is how to elevate the status of their department and get it onto the radar of high-level executives and doctors.

One way suggested by Brian Poplin, president of Aramark Healthcare Technologies, is for those in the clinical engineering department to talk with the C-suite about stuff that matters to them in a language they can understand.

"We get excited about talking about technology planning and the bells and whistles on devices," Poplin said. "And we talk about the issues that are important to us in our lexicon and our language."

To find out what executives care about, Poplin recommended consulting the American College of Healthcare Executives' list of the top 10 issues in 2011 confronting hospital executives, which covers everything from financial challenges (an unsurprising number one on the list) to setting up accountable care organizations. HTMs should then tie their work in the hospital to these matters close to the C-suite's heart.

For instance, they can help their organizations centralize management of vendor and service contracts (to help address "financial challenges"), all while discussing the delicate balance between the cost of a service contract on the one hand, and equipment uptime on the other. Biomeds can also take the lead in monitoring and responding to device recalls ("patient safety and quality," number three on the list), and make sure doctors get the devices they need and know how to use them (a two-fer: "physician-hospital relationships," number six, and "personnel shortages," number 9).

Many of the speakers said an expanding role for biomeds and the need to promote the profession justify a somewhat controversial proposal to adopt "healthcare technology management" as the umbrella name for clinical engineering, which happened at an AAMI-convened meeting last fall.

"I've heard a lot of negative comments about the healthcare technology management name, and the comments have gone along the lines of, 'It's not a good fit for what we do,'" Keller said. But he said the name reflects the expanding "focus of our profession beyond medical equipment maintenance to cover the entire health technology life cycle."

At the meeting, Alan Lipschultz, who worked in clinical engineering for more than 37 years before starting Healthcare Technology Consulting, compared the new umbrella term to "Human Resources," which includes diverse sub-fields, from recruiters to benefit managers, but still gives a unified designation the jobs are known by.

"The variety of names has hampered efforts by the community to be recognized by the C-suite," he said. "Rebranding provides an opportunity for the profession to come together and explain to the world what we're all about."

He said a marketing firm has been retained by AAMI to promote the field, and a Future Forum II, a sequel to the group held last fall that came up with HTM, will meet in September to talk about the next steps.