Report: China could account for 20% of world ultrasound sales by 2016

by Brendon Nafziger, DOTmed News Associate Editor
China will account for one-fifth of world ultrasound sales by 2016 as the country continues to invest in reforming its public health system, according to a new market research teaser released Monday.

But sales will continue to increase at a compound annual growth rate of 11 percent over the next five years as local (Tier 1) and county level (Tier 2) hospitals look to acquire fancier equipment, according to the Wellingborough, UK-based IHS subsidiary. 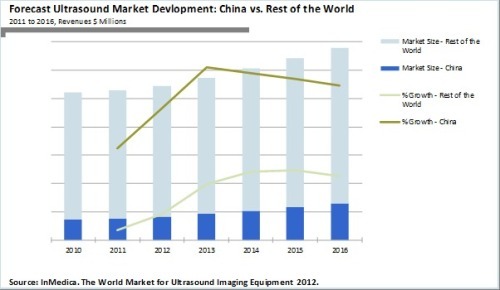 
"While the volume of lower-value ultrasound equipment is forecast to decline significantly, a dramatic shift in demand for higher value colour equipment in Tier 1 and 2 hospitals will drive strong revenue growth," Stephen Holloway, an InMedica analyst, said in a statement.

InMedica's current predictions follow a May report that found world ultrasound sales would grow 29 percent over the next five years, with much of the growth occurring in the Asia Pacific region. That report also suggested that color ultrasounds would overtake black-and-white ones in 2012/2013.

The report is The Chinese Ultrasound Equipment Market-2012.