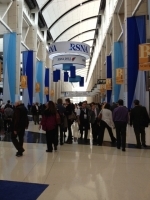 by Brendon Nafziger, DOTmed News Associate Editor
The Radiological Society of North America's 2012 annual meeting in Chicago last week was a "low-key" show that wrapped up "another slow year for technology innovation in medical imaging," according to an event post-mortem by a Frost & Sullivan analyst.

On the imaging informatics front, Daher said vendors are pushing third-generation PACS offerings that support "enterprise imaging." In this, many developers are switching the emphasis from productivity tools to business intelligence and analytics dashboards that allow better monitoring, control and communication.

"The relationship of radiologists with their referring physician communities is the hot topic in the radiology community and I think the imaging informatics vendors are overwhelmingly selling to support better communication," Daher said.

Another big push is radiation dose tracking software. The obvious driver here is California's recent law that requires radiologists performing CT scans to record doses delivered to patients, but Daher said dose-tracking is taking off even in states that don't legally require it.

GE Healthcare has been offering software in this field for a while, with its dose collecting and monitoring program DoseWatch. But at RSNA, Agfa Healthcare demonstrated its work-in-progress IMPAX Radiation Exposure Monitoring, and Sectra launched DoseTrack.

Of note during the show, Bayer HealthCare announced they were buying Radimetrics Inc., which makes software called eXposure that tracks organ dose. Bayer could use this not just for tracking ionizing radiation dose from the scanner but also contrast dose, Daher said.

"We really saw Bayer do a very smart move in trying to position itself in this area," Daher said.