by Carol Ko, Staff Writer
Molecular imaging (formally called nuclear medicine) is caught in a paradox at the moment. Although the field is on the cusp of exciting breakthroughs, particularly on the radiopharmaceuticals side, it also faces some major challenges.

Because molecular imaging excels at visualizing cellular changes that occur during the early stages of a disease, it has the potential to detect disease long before it can be spotted in a CT or MR scan. Those in the field argue that this technology is uniquely suited to provide what they term personalized medicine -- a course of treatment that caters to each individual’s unique physiological makeup.

But whether this vision is compatible with the current paradigm shift toward value-based health care is another story. Proponents argue that molecular imaging may ultimately provide a more accurate and efficient diagnosis that eliminates the need for extra testing. However, it’s also notorious for being very costly and heavily regulated.

In short, the future of molecular imaging is up in the air. Though just three years ago Frost & Sullivan had a sanguine forecast for the field—predicting growth from $552.4 million in 2010 to $841.8 million in 2017— it’s far from clear whether that’s still the case.

“The forecast was a little too aggressive,” says Roberto Aranibar, senior analyst at Frost and Sullivan. “The market’s been stalling and people have been expecting these markets to take off for a while but it hasn’t happened yet – things happen slowly.”

A few factors contribute to this stalled growth. For one, the health of this sector hinges overwhelmingly on the question of reimbursement, which have been declining precipitously since 2010. Nuclear cardiology in particular took a big hit in 2010 when Medicare bundled three reimbursement scan codes into one.

Furthermore, dedicated cardiac scanners are on the decline. Cardiology practices are increasingly integrating with hospitals, and the majority of them will be employed by hospitals in the next few years. The imaging equipment they had in their practices will therefore disappear because hospitals already use general-purpose scanners. In general, the ongoing trend of cardiac practices integrating with hospitals will continue to exert downward pressure on the market — especially if reimbursements continue to drop.

“Some hospitals may be thinking about adopting PET/CT, but the problem is, they’re not sure whether it’s going to work out from a financial perspective,” says Aranibar.

Training Wheels
Training is another looming challenge for this sector. As molecular imaging becomes increasingly multidisciplinary, the field must rethink and reconfigure its training programs to help nuclear medicine professionals keep up with evolving technology. In particular, the dominance of PET/CT, which has replaced PET, poses a serious challenge for traditional nuclear medicine specialists that only have familiarity with PET, or the nuclear imaging side.

Furthermore, professionals in both fields are still undertrained in using combined modalities. “This is not just an issue in the U.S. but in Europe as well,“ says Dr. Andrei Iagaru, assistant professor of radiology at Stanford University.

Professional societies have taken steps to try to remedy the issue. In 2011, both the Society of Nuclear Medicine and the European Society of Radiology released recommendations to improve cross-modality training. SNM’s recommendations in particular seek to add more radiology training to nuclear medicine programs to help recast nuclear medicine graduates as qualified candidates for radiology positions.

In one article published in the Journal of Nuclear Medicine, author Steven M. Larson puts it more succinctly: “The term nuclear medicine is really a synonym for molecular imaging and therapy,” he writes.

PET/CT
The first generation of PET/CT scanners, introduced over a decade ago, was very rudimentary by today’s standards: a single slice spiral CT integrated with a PET camera. Now PET/CT’s dominance is such that major manufacturers don’t even produce standalone PET machines anymore.

Though CT can successfully detect lesions, CT is unable to determine whether these lesions are malignant or benign. On the other hand, PET lacks anatomical precision. Fusing these two modalities together allows for a highly sensitive and precise scan that assists oncologists with early detection of disease and the staging of therapy.

PET/CT works by combining two complementary modalities in one. PET utilizes radioisotope fluorine-18, most commonly attached to the molecule fluorodeoxyglucose (FDG), which concentrates in quickly metabolizing tissue such as tumors.

“The sum is better than the parts in this case. And the customer flexibility of clinical diagnostic PET/CT is an advantage. If you don’t have enough patients to do the PET/ CT you can do the CT alone,” says Stanford University’s Iagaru. 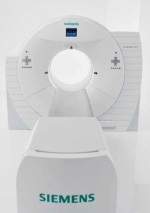 Indeed, Siemens designed its Biograph PET/CT scanners with cost-conscious flexibility in mind. If customers decide to invest in a better system 10 years down the line, the manufacturer gives them the option to buy upgrades for the next-generation three ring or four ring or 64 or 128 slice system. “We’ve designed and engineered these things so you can buy them as your need develops,” says Robert Brait, molecular imaging product manager at Siemens.

There’s also more good news on the cost front: since growing clinical evidence shows that PET/CT may also be effective for treatment monitoring, CMS reached a “no-decision” about therapy monitoring, letting payers decide what to do, further fueling its growth.

Using Q.Freeze technology, GE’s Discovery PET/CT 610 aims to automatically correct the distortion that happens as the patient breathes—a primary culprit of attenuation. “This is really the future, where the PET/CT space is going. From the diagno sis staging spot in the care continuum to the treatment monitoring space,” says Jamie McCoy, chief marketing officer for MR/CT products at GE Healthcare.

PET/MRI
PET/MRI is the newest hybrid imaging system to hit the market. GE, Philips and Siemens all sell PET/MRI systems, while Siemens is the first to offer a whole body and simultaneous acquisition PET/MRI system.

The Siemens Biograph mMR integrates a PET ring detector featuring solid-state photodiodes and 3T MR. Data for both modalities is acquired simultaneously as the scanner runs MR protocols and the PET camera records photon strikes from the radiotracer.

The technology, which combines PET’s physiological imaging with the soft tissue visualization capabilities of MRI, has particularly strong potential for neurology, which already relies heavily on MRI to visualize brain tissue.

PET/MRI may one day take over brain, neck and prostate cancer applications and also has the potential to take over certain cardiovascular uses unexplored by PET/ CT, such as plaque characterization. Studies show that PET/MRI may be effective at detecting macrophage cells that indicate inflammation in atherosclerotic plaque.

Proponents are billing this technology as a better, lower-dose version of PET/CT that will eventually overtake its place in oncology. “It’s definitely useful in certain indications such as in pediatric patients to reduce radiation exposure,” says Iagaru. But he also warns that reimbursement issues will significantly hinder adoption. “I think they should reimburse it. But the trend is to reimburse less and less. It’s convenient for a subset of patients but I don’t think reimbursement will be equal to the reimbursement for PET or MR,” he says.

Dr. Stanley J. Goldsmith, a leader in the field of nuclear medicine and molecular imaging and former professor of radiology and medicine at the Weill Medical College of Cornell University, cautions against buying into the hype too quickly. “People are tripping over themselves to get this latest and greatest, most expensive thing when we don’t know the incremental advantage,” he says. Goldsmith also thinks more people would have a problem with the claustrophobic effects of MRI machines than with dose levels in CT. “Frankly, I think most of the anxiety associated with radiation is overdone,” he says.

Indeed, although its potential for clinical applications has yet to be fully explored, and though it holds an edge over PET/CT in certain areas, some experts say it’s doubtful whether this new hybrid technology will displace the well-established, decade-old PET/ CT anytime soon, even as dose awareness continues to be a hot topic among OEMs and clinicians. “PET/MR is too expensive at this point. They’re not being used for prac tical clinical use,” says Frost and Sullivan’s Aranibar.

“Unless there’s some movement in that direction, most hospitals won’t be able to financially justify replacing their SPECT cameras with SPECT hybrids,” says Dr. Patrice Rehm, professor of radiology and medical imaging and director of the division of nuclear medicine at University of Virginia.

But the advantages of SPECT/CT parallel PET/CT in many ways. In SPECT, clinicians inject a radiopharmaceutical into the bloodstream that emits gamma radiation picked up by a gamma camera that detects images as it rotates around the patient. By combining SPECT with CT, doctors are able to fuse SPECT data with anatomic precision, correcting limitations of standalone SPECT images for attenuation and photon scatter. This helps clarify inconclusive SPECT results in oncology, neurology and cardiac applications.

Reducing exam times and dose continue to be key concerns in this market as well. In June 2012 GE released the Optima NM/ CT 640, a low-dose, fast rotation SPECT/CT hybrid system that can cut image acquisition times for certain scans from 39 minutes to 22. The Optima was rolled out with the ability to purchase upgrades in the future.

Despite the reimbursement code issue, some experts are optimistic about the eventual adoption of SPECT/CT. “PET/CT blew away PET alone and we’re going to see that with SPECT. I think anyone who can afford to purchase SPECT/CT would prefer interpreting images on it,” says Goldsmith.

SPECT
Whether SPECT is going to go the way of the dinosaur in the future is still an open debate and depends largely on whether manufacturers are willing to invest in new technological innovations for these systems, according to experts.

Though many speculate that PET/CT is going to win out over SPECT in the end, PET radiopharmaceuticals still face a bottleneck for FDA approval. “To fully replace things by PET/CT you need to drive down the costs and get regulatory/ reimbursement issues resolved,” says Stanford University’s Iagaru.

Others agree. “I don’t think it will be obsolete. It’s not as glamorous as new modalities but it’s one of the most cost-effective imaging modalities you can do and it demonstrates physiology, not just anatomy,” says Nicki Hilliard, professor of nuclear pharmacy and pharmacy practice at University of Arkansas.

On the horizon
Though it’s difficult to predict what the future holds for molecular imaging in light of the uncertainty around reimbursement, experts cite a few big trends and open questions that will continue to shape the field.

“Hybrid imaging is here to stay and will probably move on to trimodal type imaging devices,” says Siemens’ Brait. Manufacturers such as Siemens and Carestream offer PET/SPECT/CT systems for preclinical small animal imaging, while researchers in Europe are exploring PET/CT/MR’s clinical advantages in imaging lymphoma, myeloma, melanoma, neuroendocrine tumors, and head and neck cancers. While these systems are nowhere near ready for the market, the general consensus is that such systems represent the wave of the future for nuclear medicine.

Professionals also call for streamlining the costly, labyrinthine hurdles of the U.S. FDA regulatory process, which they allege stifles innovation. “Say you have something very good and it’s approved elsewhere. If you need to run the same tests in the U.S., how do you do it in a manner that’s not prohibitive from a cost perspective and in a way where the company will recover those investments?” says Iagaru.

Finally, many scientists are excited about novel radiopharmaceuticals such as Amyvid, which help detect neurodegenerative diseases such as Alzheimer’s and Parkinson’s. Consequently, nuclear medicine, traditionally a stronghold within oncology and cardiology, is receiving more attention from neurology as well. “It’s kind of interesting to see if neurologists will begin adopting these types of technologies for what they’re doing. It takes a long time for physicians and clinicians to adopt something new,” says Frost and Sullivan’s Aranibar.