by Carol Ko, Staff Writer
It’s no secret that getting a mammogram is a nerve-wracking experience for many women. Although some studies suggest women at higher risk for breast cancer are more likely to get regular screens, others show that the most fearful women are the least likely to be screened.

But these recommendations aren’t a fluke: The American College of Physicians made similar recommendations two years ago and the National Breast Cancer Coalition, an advocacy group for patients, has openly expressed skepticism around mammography’s limitations and urges women to make their own decisions based on the best available facts.

In November 2012, the New England Journal of Medicine came out with a large-scale study that seemed to lend further credence to these recommendations. It examined and analyzed health statistics on breast cancer diagnoses over the last 30 years to examine the impact of mammogram screenings. As expected, detection of early stage cancers increased with the introduction of mammogram screenings. However, the diagnosis rate for advanced cancer screenings remained almost unchanged.

This raises troubling questions around the efficacy of mammography: if mammograms find more early stage cancers, this should lead to a decrease in advanced-stage cancer diagnoses. The study claimed that mammography ultimately made only a small difference in the rate of death from breast cancer while leading to high rates of false positives among patients.

Of course, these studies’ conclusions are vigorously contested by many medical experts. In a rebuttal published on Auntminnie.com, Dr. Daniel Kopans criticized the study’s lack of direct patient data, citing multiple studies using randomized, controlled trials that showed much lower false positive rates. He also argued that the study’s baseline of what breast cancer screening rates would have looked like without mammography screening used unreliable data collected from 1976 to 1979, ignoring 40 years of data collected by the Connecticut Tumor Registry that showed a different rate of increase in breast cancer.

Dr. Rachel Brem, director of breast imaging and interventional center and professor of radiology at George Washington University, sees the data as a call to make mammography better, not reduce screenings. “We’re going backward. Nobody promises anybody a cure — we promise we try to do the best we can, but people die of breast cancer, but the fact that it’s imperfect just speaks to the need for additional research,” she says.

Are you positive?
One of the main points in the infamous Preventative Task Force findings zeroed in on the anxiety and psychological harm that false positive results had on patients. Other highly publicized studies, including a Danish study released in March 2013, have also shown that false positives take a psychological toll on patients for up to three years afterward.

Just now common are false positives? It depends on your definition. More than half of women who get mammograms in their forties can expect to get called back for additional screenings, though many doctors dispute whether this should count as a false positive.

It’s estimated that 7 to 9 percent of patients will receive a false-positive biopsy recommendation, while false positive results will send 10 out of 200 women to unnecessary surgery.

“One of the things about the risks of screening is patients get unnecessary biopsies and callbacks — better precision in imaging would help that,” says Dr. Julia White, professor of oncology at Ohio State University.

But there’s a tricky balance between lowering false positives while maintaining enough screening accuracy to avoid an uptick in false negatives. The challenge for screening technology is essentially twofold: screenings must be accurate enough to pick up on abnormalities while being sensitive enough to rule out misleading signs.

On the lab-error side, manufacturers have also devised products to help remedy the problem on a more practical level. The Know Error System, for example, is a DNA matching product that confirms that surgical biopsy samples being evaluated belong to the patient being diagnosed. Such safeguards may help put patients’ worries to rest as they go into surgery.

Along with the question of false positives, there’s also uncertainty around the issue of overtreatment. A one-size-fits-all treatment may be unnecessary, even outright harmful, depending on the kind of breast cancer screenings detect, according to experts. “Breast cancer is a very heterogeneous disease and has different risks and recurrence rates,” says Dr. John Nelson of Battlefield Imaging.

For example, a screening may turn up abnormalities such as DCIS—a kind of slow-growing cancer in the breast duct that usually never progresses to the point of killing a woman. If such abnormalities are found, it’s followed up with more tests, and if it’s found to be cancerous — even if it’s relatively harmless — women commonly have it treated with radiation, hormone therapy, chemotherapy, surgery, or even breast removal, all of which pose additional risks that may not be worth it if the cancer poses little mortality risk for the patient.

Dense Detection
One of the major limitations of mammography lies in its failure to adequately detect cancer in women with dense breasts, or breasts that have more connective tissue than fatty tissue. Approximately 40 percent of patients undergoing screenings have dense breasts.

One study of thousands of patients showed that mammograms missed 40 percent of cancers in women with dense breast tissue that were found on ultrasound. Other studies have showed similar results. Yet, while it’s well-established now that breast density is, broadly speaking, associated with higher cancer risks, researchers have still not reached an official consensus what women should do to alleviate those risks.

The research community’s reservations haven’t stopped lawmakers from moving forward with legislation. Connecticut enacted a law in 2010 that requires providers to inform women in writing that they have dense breasts after one patient with dense breasts died of a missed detection, and in total, seven other states have passed similar laws.

While most physicians are in favor of informing patients, they’re also wary of giving them directives that have not yet been backed by evidence. “There is no evidence that supplemental screening would improve outcomes. Informing patients is necessary but adding language about supplemental studies could mislead patients into thinking that their outcomes could be improved through these studies,” says Dr. Christoph Lee, assistant professor at University of Washington.

Studies show that ultrasounds and MRIs may be more effective at spotting breast cancer, with ultrasounds finding three to four additional cancers per 1,000 women with dense breasts that mammograms miss. However, those tests are usually reserved for high-risk women with dense breasts, and using them in conjunction with 2-D mammograms may add considerably to the cost of breast cancer screening.

Since sliced bread
Digital breast tomosynthesis is an imaging technique that many breast imaging experts agree will help improve breast screenings moving forward. “Tomosynthesis is the most promising technology right now — it’s a hot topic,” says Dr. Jennifer Drukteinis, lead author of an overview published in April 2012 of new breast imaging technologies in the pipeline for dense breasts. Hologic is currently the only company offering this technology in the U.S.

Tomosynthesis produces tomographic “slices” of an entire tissue volume, similar to a CT scan, using a single acquisition. This enables doctors to view the breast as individual slices, eliminating the overlap that may hide a cancer in a woman with very dense breasts and thereby reducing false positives. “Digital tomosynthesis cut down false positive callbacks by 24% in our first year and increased our cancer detection rate. So when you look at the risk/benefit balance, that risk has been decreased and the balance is statistically better,” says University of Pennsylvania’s Conant. 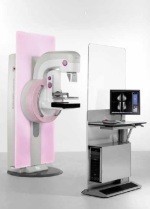 One downside of the modality is that it uses more dose than traditional mammography. Indeed, mammography systems are currently raising the bar even higher on dose reduction—Siemens Healthcare recently announced that their latest mammography , the Mammomat Inspiration Prime Edition, was approved by the FDA for breast cancer screening. The system is designed to reduce dose up to 30 percent, according to the company.

But new digital tomosynthesis software that received FDA approval in May may help level the playing field.

However, some doctors still have reservations regarding wholehearted adoption. “Digital tomo is going to be a financial burden on patients. Patients are paying 50 to100 dollars for tomo. You’re going to increase disparities in terms of access. You wonder if we’re going to have a two-tiered system where you get more if you pay more,” says Lee.

Cost isn’t the only worry. “There are still a lot of unknowns and I think the concern from physician standpoint as a radiologist is that this will put a lot of pressure in terms of patient volume on our practices,” says Lee.

Mammography redone
No matter where experts fall in the mammography debate, they all agree that traditional mammography screening is going to change. A one-size-fits-all screening regimen for women no longer makes sense, they say. “It’s time to have risk stratified screening for patients who need it most,” says Ohio State University’s White.

Still, not all doctors think more screening is better. “Not a lot of radiologists will say this to you, but there are different groups we’re over-imaging. Is there a way we can reduce cancer while tailoring screening to a woman’s needs? We’re just getting into that realm with research and new technologies and it would be just horrible to stop,” says Conant.

“More research has to be done to determine the necessary application for different types of breast disease,” says Jennifer Okken, women’s health product manager at Siemens. “That’s an open ended question that remains to be answered. Siemens is working hard with our clinical researchers to answer these questions."