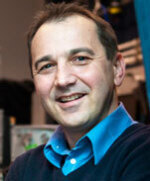 A second amyloid may play a role in Alzheimer's, study

by Loren Bonner, DOTmed News Online Editor
A protein associated with obesity and type 2 diabetes is now being linked with Alzheimer's disease, according to new research from the UC Davis Alzheimer's Disease Center.

Researchers there have found that a protein called amylin travels through the bloodstream and accumulates in the brains of individuals with type 2 diabetes and dementia in the same way that beta-amyloid plaques do in Alzheimer's patients.

"We saw amylin and a-beta [beta-amyloid] depositing on the same areas in the brain," Dr. Florin Despa, co-author of the study and assistant professor-in-residence in the UC Davis Department of Pharmacology, told DOTmed News.

They also found amylin deposits that were independent from the beta-amyloid plaque.

Many scientists believe that beta-amyloid plaque can kill vital neural pathways that are responsible for language, memory and behavior. However, detecting beta-amyloid plaque in individuals suspected to have Alzheimer's cannot confirm the disease — at least right now. It can only help to rule it out.

Amylin is produced in the pancreas. It circulates in the bloodstream with insulin and plays a critical role in glycemic regulation.

Although it's widely known that people with type 2 diabetes have a high rate of dementia, there has been no conclusive evidence about why this occurs, until now.

"Studies showing patients with type 2 diabetes and obesity have a double risk of dementia and Alzheimer's, and now we have a direct link between the pancreas, which is known to be the home of diabetes, and complications in the brain," said Despa.

For the study, researchers examined post-mortem brain samples of three different patient groups: those who had type 2 diabetes and dementia, those with Alzheimer's disease without diabetes, and healthy individuals who served as controls. Amylin deposits were found on the brain tissues of all groups except the healthy control subjects.

Although more studies will need to be conducted, Despa said the findings can open up new discoveries in drug development.