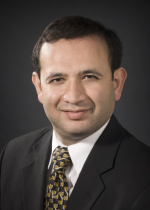 by Carol Ko, Staff Writer
Imagine suffering seizures once or twice a week, being unable to drive, and having very limited independence — this is a way of life for hundreds of thousands of people suffering from epilepsy in the U.S. who don’t respond to medication.

Dana Lockwood, 24, is one of those patients. “Even heavily medicated, I very occasionally suffered from full body convulsions where I lost consciousness. It was very disruptive to my life and made it hard for me to be independent,” he said.

But now, thanks to a cutting-edge minimally invasive MRI-guided laser treatment, Lockwood has been seizure-free and will have an opportunity to pursue his dream of studying abroad in Japan and teaching English.

Lockwood’s options began to open up last year when he found out that his seizures were caused by hypothalamic hamartoma, a rare benign brain tumor or lesion of the hypothalamus located deep in the brain.

Until recently, treatment options for these tumors were limited. The traditional method of treatment is craniotomy, a surgery that opens up the skull to remove the brain lesion. But this procedure demands a great deal of downtime from patients —about a month —and an additional three months to get back up to full speed.

Doctors have long lamented that though a significant number of epilepsy patients are candidates for surgery, only a tiny fraction of them opt for it each year. “In total, seven or eight thousand surgical procedures are performed every year when you’ve got a million who need treatment,” says Dr. Angus Wilfong, medical director, Comprehensive Epilepsy Program, Texas Children’s Hospital.

“People say, look I have a busy life and I have kids and I can’t have downtime for a month like this,” says Dr. Ashesh Mehta, director of epilepsy surgery at North Shore- LIJ Health System.

While untreated epilepsy may significantly reduce quality of life for sufferers, there’s also a cost to society as a whole: between health care costs and lost wages, epilepsy costs the U.S. an estimated $17.6 billion every year.

Pros and Cons
Though preliminary figures tracking patients show the minimally invasive treatment to be slightly less effective than traditional craniotomy (with a 60 percent seizure-free rate compared to 70 to 80 percent), it may bring in a new subset of patients who would have otherwise opted to continue on without surgical treatment. And as surgeons continue to adjust to the learning curve around this new surgical technique, that rate of effectiveness may also go up.

Lockwood himself had already ruled out craniotomy as a treatment option and was looking into another noninvasive procedure that had already been around for some time, the gamma knife, which uses gamma radiation to kill abnormal tissue.

But the gamma knife had some worrisome drawbacks for Lockwood, including swelling of the brain and lower rates of efficacy. When Lockwood found out about new MRI-guided laser ablation, it seemed like the noninvasive option with the fewest drawbacks.

The treatment was pioneered by surgeons at the Texas Children’s Hospital, where the first surgeries were performed by Dr. Daniel Curry, director of pediatric surgical epilepsy and functional neurosurgery and Dr. Wilfong. Both doctors had noted that MRIguided laser technology was already being used to treat certain tumors.

“We thought, ‘why couldn’t we use this technology approved for tumors to treat epilepsy?’” said Wilfong. He and Curry met with the manufacturer of this technology, Visualase, and evaluated a series of patients who could potentially benefit from this procedure. Upon gaining approval through an institutional review board, they performed their first case three and a half years ago.

Since then, the surgeons have performed almost 30 cases, and more than 150 cases have been performed around the nation. “The vast majority of patients, instead of spending five to seven days in the hospital after a craniotomy, go home the next day,” says Wilfong.

Pins and needles
The procedure does pose certain technical challenges for doctors performing the surgery: the most critical component of the procedure’s success is the precise placement of the laser probe —to the millimeter, experts say.

Doctors start by performing an MRI scan on the patient that shows the vessels on the brain. Then, they place a frame on the skull with a coordinate system. A second scan is combined with the first to show exactly where and at what angle to place the probe. An incision the size of a pinhole is made in the head and the probe is bolted to the skull.

The patient is then sent to the MRI suite, where the probe is heated up and the laser zaps abnormal brain tissue. After the treatment is completed, doctors remove the probe and close up the incision. Patients are normally ready to leave the hospital the next day.

Border Control
No matter what technique neurosurgeons use to target abnormal brain tissue, there’s always a penumbra of tissue around the treated area called a drop-off — where tissue has been damaged but not killed — creating areas of the brain that are not totally dead, but not fully functioning either. In that regard, lasers provide an advantage for surgeons because their drop-off is very sharp. The greater the drop-off is, the greater the benefit to the patient.

“By using light energy, the drop-off is very quick so that the border between the killed and completely untouched is minimal,” says North Shore’s Mehta.

But more than the laser itself, what makes this technology particularly effective is its fusion with MRI.

In essence, surgeons must perform controlled brain damage, destroying the lesion without affecting healthy neighboring areas. With MRI-guided laser technology, doctors are able to see a live image of the patient’s brain as they perform laser ablation. MRI is an ideal modality for this procedure because it’s not only good at imaging soft brain tissue, it’s also highly sensitive to temperature changes, meaning doctors can monitor the areas of the brain treated and heated by the laser in real time.

“Previously, you wouldn’t know until afterward how effective the treatment was, so the tendency was to undertreat it. But now you can immediately fix that by adding treatment on,” says Dr. Jeffrey Ojemann – director of epilepsy surgery at Seattle Children’s Hospital.

Many eggs, many baskets
For patient Dana Lockwood, the recovery wasn’t very difficult. He was temporarily paralyzed on his left side—a common side effect, doctors reassured him—but he quickly found himself back on his feet. “Ultimately, the most difficult part of it was getting the general anesthesia out of my system,” he said.

Researchers are lauding the technology as a potential game changer for epilepsy, opening up treatment possibilities for patients who otherwise would have had few options. But as other new technologies continue to evolve and come to market, this technology may be in head-to-head competition with other cutting edge techniques.

“The laser will probably be part of epilepsy treatment going forward, but I would be cautious to put all my eggs in the basket of one particular form of energy delivery,” says Ojemann. For example, he cites some promising studies in Israel investigating HIFU ultrasound technology that noninvasively targets and destroys tissue. “I don’t get bonded as a practitioner to one system or another — whoever wins the battle to get the best clinical results is who you want to go with,” he says.

Click here to check out the DOTmed New Equipment Guide for surgical and cosmetic lasers.