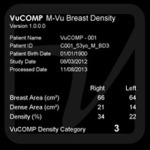 Using advanced computer algorithms, the M-Vu Breast Density tool will help radiologists more accurately determine if a woman has dense breast tissue based on her digital mammogram. Dense breast tissue often makes it harder for radiologists to see abnormalities on a mammogram. The algorithm calculates a percentage of the breast area that is dense and converts it to one of four density categories corresponding to the BI-RADS standards.

Studies have shown that women with dense breast tissue have a higher rate of breast cancer. But it doesn't necessarily equate to increased cancer deaths, according to an article from the Journal of the National Cancer Institute. Additionally, the jury is still out in the medical community about what constitutes dense breast tissue in a woman, even though many vendors, like VuCOMP, have developed special tools to measure it.

CAD systems are essentially a second pair of eyes for radiologists to get a more accurate and efficient read of an exam. The technology has been around since the mid-1990s, although recent FDA guidelines have significantly raised the bar for CAD performance requirements, including comprehensive reader studies proving that radiologists are more effective when they use CAD. VuCOMP's CAD received FDA approval to work with film mammography in January 2012, and supplemental approval for digital mammography in October 2012. The company said its system is the only FDA-approved mammography CAD product in the world that meets the FDA's new CAD requirements.