ECR 2015 - my private and subjective report

It was fuller than ever - at least on the Friday that I was at the ECR. I particularly always enjoy the escalator ride down (see picture) with the massive crowd at the bottom and toward the GE booth. Amazing, by the way, how many people greet each other on the way up and down.

Several booths - especially the ones of the big OEMS's - were so full that even scheduled meetings were difficult. You simply could not find your meeting partners, or the ambient noise was so loud that a normal conversation was difficult. And mobile phone service either did not work or one did not hear the ringing or feel the vibration alarm. On the other hand if you walk around long enough the chance of actually meeting the people you wanted to meet is pretty good — my almost 11 km were very well invested despite the foot pain at the end of the day.

Problem with that is, however, the danger of dehydration and the lack of decent food (or the lack of time to stand in line to get something to eat). After taking advantage of the hospitality of VISUS it is now time to say THANK YOU for allowing me to use your booth as meeting place and as a fountain of nourishment for all these years.

For me (and probably many of the readers of this report) the ECR (and for that matter the RSNA as well) is less important as a means of getting to know the latest and greatest technological breakthroughs, but is seen by most as a chance to exchange personal news and to see who has advanced to what position, who has moved on — and of course the opportunity to grow your own personal network.

Weather was beautiful — as always. At least I remember that the last 4 or 5 years were sunny with decent temperatures. 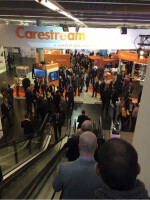 Science cannot be judged by me — did not attend any lectures / sessions...but my science friends who did said it was of usual high standard.

After RSNA only 4 months ago, nobody really expected any major technical/product introductions — and that is exactly what happened. The vendors showed their RSNA systems but were able to boast with actual sales of systems since then. Good indication of whether the technology highlights were actually able to find a home. While I heard very interesting numbers and was informed about actual deals that were closed I would like to keep these for myself — or at least do not want to put them in a document that is semiofficial.

Last year I walked the booth space one hour before the opening...unfortunately I did not arrive early enough this year. I miss these walks without people; no better way to observe the individual booth setup and see the "advertised" systems and solutions. Next year I will do that again!!

Why the title COLORS and BIG DISPLAYS? Well let me point you to the pictures above. I enjoyed the color diversity ... different individual color schemes for the same hardware (see as an example the Planmed Extremety CT), and booth design with fitting colors (GE, BAYER, PHILIPS). Maybe we can choose individually colored MRI or CT systems in the future — so not only personalized medicine, but personalized imaging systems … far-fetched? Maybe!

BIG DISPLAYS: Everywhere flashing and moving pictures on large displays (Toshiba, GE) with a particularly nice one next to the SIEMENS reception. That one was already shown at the RSNA, but it looked better at the ECR location. I loved all these great displays!

17:30, 30 minutes after the official end I leave with thousands toward the underground station passing by the grand-looking Austria Center. In my case not returning the following day.

Have a great year and stop by the MedTec research campus STIMULATE (forschungscampus.stimulate.de) and my chair INKA (inka-md.de) in Magdeburg if you are around or need a partner for Minimal-Invasive Image Guided Surgery Development.