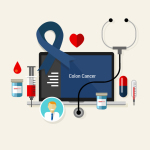 by Lee Nelson, Contributing Reporter
It can be very frightening to lose a relative to colorectal cancer. There is always that fear that you will get it, too. But does that mean that you need to have aggressive screening for the disease the rest of your life even when you are older?

Some researchers are saying “no,” despite guidelines to the contrary.

“When you get to be 65 years old, you don’t need to undergo a colonoscopy every five years if you only have history with one family member,” Dr. Chyke Doubeni, told HCB News. He is chair of the department of Family Medicine and Community Health at the Perlman School of Medicine at the University of Pennsylvania, Philadelphia.

“If you have had a colonoscopy every five or 10 years, and had several of them in a row that have all been negative, you can take a break for a while. And most likely it doesn’t matter what your family history is once you get older,” he adds.

In an editorial published last week in the journal Gastroenterology, Doubeni, along with Robert Fletcher, Department of Population Medicine at Harvard Medical School, wrote their thoughts and suggestions in the context of a new study published in that issue. The research followed 144,768 men and women aged 55 to 74 for 13 years to figure out each of their risks of the disease in light of their history of colorectal cancer in a first-degree relative.

“Currently, standards recommend aggressive screening until ages 75-85. But now a growing body of evidence shows that it is not necessary to continue to screen most older people with a family history that aggressively," he continued.

Doubeni still agrees wholeheartedly that screening is the most effective way to reduce your risk of dying from the disease.

“Screening has prevented 500,000 deaths from the 1980s to 2010. It’s really effective – and the technology has gotten better with more tests available,” he says.

But for patients over 55, particularly those 65 and older with only one immediate family member with colorectal cancer, he believes screening should be done at "average risk" frequency. That means a colonoscopy should be scheduled every 10 years, or other recommended screening tests such as fecal immonochemical test (FIT), every year.

He added that if someone has a family history of colorectal cancer, there are a few things that need to happen.

“You need your risks carefully assessed and screened,” Doubeni says. “Those with two or more first degree relatives with the disease should continue to receive a colonoscopy more often until more evidence is available.”

According to the Centers for Disease Control and Prevention, colorectal cancer remains the second leading cancer killer among American men and women, with nearly 50,000 deaths annually. The center launched a campaign a few years ago declaring that if everyone aged 50 years or older had regular screening tests, at least 60 percent of deaths from this disease could be avoided.

It’s still tough to get people to get a colonoscopy, whether it's due to fear, lack of convenience, or price. For those patients, Doubeni says that the FIT test is a simple solution.

“You can get a lot more people screened. It’s very easy. I can mail the FIT to them at home. They don’t even have to come into an office to do it or get it,” Doubeni says.