by Christina Hwang, Contributing Reporter
The world’s largest database of multiple sclerosis (MS) MR scans, Neurological Software Tool for Reliable Atrophy Measurement in MS, or NeuroSTREAM, has been developed by researchers from the University at Buffalo.

The database consists of 20,000 brain scans with data from approximately 4,000 MS patients and will help determine a patient’s brain atrophy by measuring the lateral ventricular volume (LVV) in the brain, which grows larger as atrophy occurs.

At the American Academy of Neurology meeting in April, the developers reported that preliminary results showed that the database was accurate, reliable and clinically relevant to measuring brain atrophy.

“To detect variability of brain volume changes at different field strengths, we used a dataset of 201 healthy controls and MS patients who obtained both 1.5T and 3T scans in 72 hours,” Dr. Robert Zivadinov, Ph.D., professor of neurology and director of the Buffalo Neuroimaging Analysis Center in the Jacobs School of Medicine and Biomedical Sciences at the university, told HCB News. “To clinically validate the performance of the LVV algorithm, we used a dataset of 181 MS patients who obtained yearly MRI 1.5T scans for 10 years.”

To further test the accuracy of NeuroSTREAM, the researchers will create a different database of changes in a patient’s brain volume by collecting over 1,000 MR images from 30 centers in the U.S. and around the world.

The following image shows brain scans of patients who were scanned with different MR systems. The red areas show a key predictor of disease progression for those with MS. 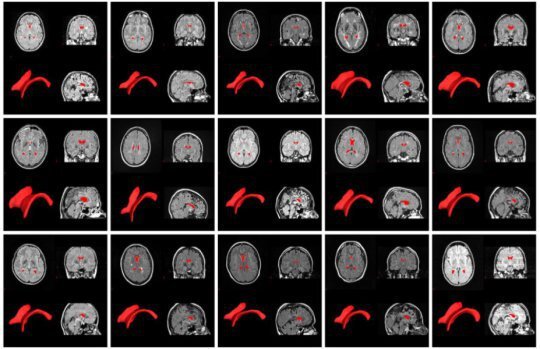 
The software runs on a cloud-based platform and can be used from workstations, laptops, tablets and smart phones. The ultimate goal is to develop a website where clinicians can upload anonymous patient scans and receive real-time feedback on what the images might reveal.

“Measuring brain atrophy on an annual basis will allow clinicians to identify which of their patients is at highest risk for physical and cognitive decline,” said Zivadinov.

To successfully measure brain atrophy in a way that is meaningful for treatment, Zivadinov said that there needs to be a normative database such as NeuroSTREAM where individual patients can be compared to the population of MS patients.