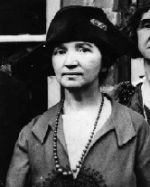 by Sean Ruck, Contributing Editor
On Oct. 16, 1916, Margaret Sanger, a nurse living in Brooklyn, New York, broke the law when she opened the nation’s first birth control clinic. Nine days later, she would be arrested for it. Sanger was in violation of the Comstock Law, which was passed by Congress in 1873, that sought to suppress dissemination of obscene literature via the United States Postal Service. The law was wide-ranging in its definition of what would be deemed “obscene.” Under the law, some things, like the distribution of literature about erotica and sex toys, were prohibited. But information about contraception and abortifacients was also illegal. The law went as far as to outlaw any personal correspondence that made mention of any type of sexual content.

Sanger was an obvious target for Comstock Law enforcement, having long been an advocate for educating the public, particularly the poor, about contraception. In fact, she’s credited with creating the term “birth control.” It was in this environment that Sanger opened her clinic.

Sanger’s personal history played a major role in her convictions, and her risking conviction. Born Margaret Louise Higgins, she was the sixth of 11 children, with her mother suffering seven miscarriages or stillbirths. Childbirth took its toll on Sanger’s mother and she passed away at the age of 49. At the funeral, Sanger is reputed to have yelled at her father, saying, “You caused this. Mother is dead from having too many children.” While her father would go on to become an advocate for women’s suffrage and free education, it was his daughter who would have a farther-reaching and lasting impact.

If personal tragedy was the cornerstone of her commitment to educating the public about birth control, it was her work as a nurse in the slums of New York City that provided the rest of the structure. Sanger quite often tended to poor women who, having too many children and no means to care for more, resorted to back-alley abortions. It was common for these women to experience medical emergencies after turning to shadowy practitioners who had little medical skill and the opportunity to prey on their desperation.

After numerous experiences tending to poor women after botched abortions, self-induced miscarriages or trauma from having many children, Sanger declared that she would not treat another woman until she made information about contraception available to all. She visited city libraries to put together information on contraception, and to her consternation, couldn’t find any. So she further took matters into her own hands, becoming the writer and publisher of the eight-page monthly newsletter, The Woman Rebel.

In August 1914, she was indicted for mailing her pamphlet. Rather than stand trial, she fled to England. While there, her estranged husband, William, gave a copy of her work, Family Limitation, to Anthony Comstock, the former USPS postal inspector for whom the law was named. William was subsequently sentenced to 30 days in prison, but it opened the floodgates to putting the focus on birth control and contraception as a civil liberties issue.

Sanger’s conviction for circulating her works through the postal service in violation of the Comstock Law was reversed after the judge ruled that contraceptive devices could be used to cure or prevent diseases. However, advertising birth control devices as birth control was prohibited for another 18 years. The final vestiges of the Comstock Law remained until around 1972 when Massachusetts and Connecticut struck them down.

Sanger, meanwhile, did not let any grass grow under her feet. She continued to work on improving education and access to birth control and contraception. She partnered with Dr. Gregory Pincus, and through that partnership, Enovid, the first oral contraceptive to be approved by the FDA, would be created. Sanger also founded the American Birth Control League, the predecessor of Planned Parenthood. She died in 1966, one year after the U.S. Supreme Court ruled on a case that effectively legalized birth control.