by Christina Hwang, Contributing Reporter
A computer program developed at Case Western Reserve University outperformed physicians two-to-one in a study that identified abnormal tissues in MR scans of the brain.

"What these radiomic features capture are the subtle differences in quantitative measurements of tumor heterogeneity and breakdown in microarchitecture on MR, which are higher for tumor recurrence," Pallavi Tiwari, assistant professor of biomedical engineering at Case Western Reserve and leader of the study, told HCB News.

"Given that brain tumors are highly heterogeneous and disordered, we observe a high value of entropy measurements in tumor recurrence as compared to radiation necrosis," she said.

In addition, according to Tiwari, the physicians took between 10 to 15 minutes per patient and the computer took less than a minute. 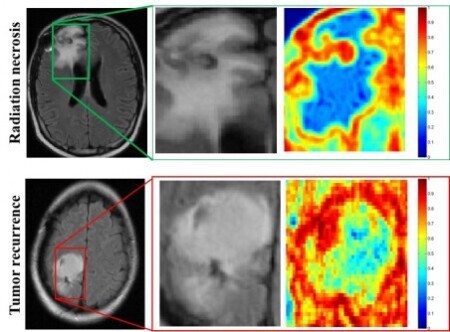 The researchers don't expect the computer program to be used on its own but as an aid in assisting neuroradiologists become more sure when identifying a suspicious lesion as radiation necrosis or cancer recurrence.

"Once evaluated on a larger cohort of studies, our algorithms can potentially be integrated in the current clinical workflow without the need for advanced imaging such as PET, and magnetic resonance spectroscopy, which are not readily available at most clinics, including community hospitals, and low- to medium-income countries," said Tiwari.