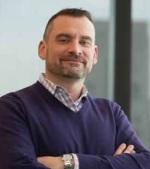 by Sean Ruck, Contributing Editor
Radiochemist Jason Lewis is the director of the Center for Molecular Imaging and Nanotechnology at Memorial Sloan Kettering Cancer Center (MSK) in Manhattan. He recently took some time to talk about the work being done in his lab and some of the exciting advances in medicine.

HCB News: What inspired you to become a scientist?
JL: I just found it intriguing. As a child, there was a program in the U.K. called Tomorrow’s World that I watched and was inspired by. I really can’t remember a time I didn’t want to be involved in science.

HCB News: How long have you been with MSK?
JL: I’ve been here nine years, coming here after 12 years at Washington University School of Medicine in St. Louis.

HCB News: What attracted you to a career at MSK?
JL: The fact that there was the clear ability to translate novel molecular probes into patient use. Memorial Sloan Kettering is second to none in that regard due to the strong support they give to research. Clinical translation is one of MSK’s main missions and there’s a great infrastructure for it.

HCB News: I saw that the MSK lab is called “The Jason Lewis Lab.” Was it started up under you?
JL: When I joined MSK, there was already an active radiochemistry program, but I was given three main tasks. The first was to build a new GMP cyclotron facility. The second was to lead a team of faculty, at 12 members now, as their service chief. The third was to start my laboratory. I think I have been able to build all three to meet MSK’s radiochemistry and molecular imaging probe research needs. I’ve also been named the vice chair for research of the Department of Radiology, which is somewhat unusual for a non-M.D. to be vice chair of a clinical department, and that brings its own set of challenges and possibilities.

HCB News: You mentioned the new cyclotron facility. Was that a new piece for Memorial Sloan Kettering?
JL: It was our second cyclotron, but in a fully GMP-compliant facility. We are able to use it to create fluorine-18, carbon-11 and other isotopes. Our other machine is located four blocks away and provides other long-lived isotopes as well.

HCB News: A lot of news was offered about your work with imaging agents. Can you discuss some of the advancements you’re most excited about?
JL: We have an extensive investigational new drug or IND list. There are 35 different tracers we can use in clinical trials here. We average about four to five new imaging and therapy probes into the clinic per year. One recent example is our work with carbon-13 pyruvate as a hyperpolarized MRI probe. All the pharmacy work is done in the new GMP facility, supporting the manufacture and supply of all manners of molecular imaging probes.
Dr. Christian Lohrmann will present on one of the new agents, MVT-2163, for the first time at the Society of Nuclear Medicine’s annual meeting this year. Using an antibody labeled with zirconium-89, it’s imaging a serum biomarker for pancreatic cancer. There has been three or four years of preclinical work done on this and Christian’s presentation will be the first to present the human data from our trial.

HCB News: What challenges do you face?
JL: I would say the very unsettled fiscal and political climate is a challenge. As scientists, we are so unsure about whether funding will be maintained or provided. I also don’t think that science necessarily gets the respect that it should. Another challenge is that human disease constantly provides a new set of questions that need to be answered. Also, especially in the U.S., not enough young people are going into science, and this has profound ramifications for the future.

HCB News: What opportunities do you see ahead?
JL: The fact that we can make a profound difference in how we treat and pursue personalized medicine. If you want to treat someone with cancer, you had better know where the cancer is. A picture speaks a thousand biopsies.

Still, the imaging community has been its own worst enemy. If there are 10 probes to look at the same target, we need to make the decision to get behind one or two, to look at the data objectively and collectively push to get the regulatory approvals and reimbursement. Most probes are coming out of academia or small pharma. Big pharma does some, too, but academic laboratories are the main source. Those labs survive by getting published and landing grants. So they constantly have to have an influx of funding for new projects and clinical trials. When someone finds a great target, others recognize that and then pursue it, too. We have to change our mindset and pick winners and support them together.

HCB News: How do you predict PET will change in the next decade?
JL: It will change in a number of ways. It will become more important as advanced cancers become more common. It will have more of a role in determining the efficacy of therapy at an earlier point. It will help physicians translate new therapies and ask better-defined questions and be a much stronger part of clinical trials. Finally, when UC-Davis introduces their whole-body PET it will lower dose, especially important in the imaging of children.

HCB News: You mentioned advanced cancers. What do you mean by that?
JL: We’ve gotten very good at treating cancer. However, if a treatment cures or destroys 99 percent of the tumor, that leaves 1 percent of the tumor that’s potentially resistant. When it comes back, it’s then a cancer we may not be used to seeing or treating. As this “evolution” happens, the questions change and we have to find new answers.