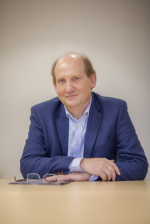 Axumin, a PET imaging agent for men with suspected prostate cancer recurrence based on elevated blood prostate specific antigen (PSA) levels following prior treatment, has seen rapid adoption in the U.S. since receiving FDA approval in May 2016.

The tracer was developed by Blue Earth Diagnostics in the U.K. and is being distributed in the U.S. by PETNET Solutions Inc., a subsidiary of Siemens Healthineers.

HealthCare Business News spoke with Jonathan Allis, D. Phil., CEO of Blue Earth Diagnostics, and Barry Scott, global head of PETNET Solutions, Inc., about Axumin’s busy year – and what we can expect in the months to come.

HCB News: How does Axumin help physicians?
Jonathan Allis: Approximately 161,000 men are diagnosed with prostate cancer each year in the U.S., so it’s a very common disease. Fortunately, it’s a disease that, if caught early, can be cured in lots of patients, and for those who cannot be cured, they still typically live for a long time – so that’s a good thing.

What is not a good thing is that about one-third of patients – potentially many years after their treatment, whether it was surgery or radiotherapy – will experience a rise in their blood level of prostate specific antigen (PSA) and that means the cancer has probably recurred somewhere.

If you don’t find out where it has recurred you cannot treat it – so you want to have an imaging test that tells you if it has recurred in the prostate bed or near the prostate, or if it’s further away somewhere in the abdomen or in bone, for example. If you can work out where the cancer is, then you can do something about it.

The problem is that current imaging methods are pretty bad at finding where this cancer has recurred. Most people will have a CT scan, but the chance of a CT scan finding the site of prostate cancer recurrence is about 10 to 15 percent, so most of the time physicians and patients are faced with the unpleasant dilemma where the patient has a rising PSA, but they can’t find or treat the disease.

If you don’t treat it at that stage, the patient may develop metastatic disease and that’s an extremely dangerous form of prostate cancer compared to the average. So, that’s where Axumin comes in. It allows you to inject a radiopharmaceutical agent into the patient. It travels to the site of cancer and allows you to see it on a PET scanner.

Axumin will detect this recurrence between 60 and 80 percent of the time – so it allows the disease to be localized so it can be treated appropriately and the disease can be stopped from spreading.

HCB News: What has been the response to Axumin from the PET imaging community since its FDA approval last year?
Jonathan Allis: When you introduce a new product, you hope that it has an unmet medical need and that when you tell people about it, that they won’t look at you in a really bored way. We are happy to say we’ve not had that response with Axumin – it addresses a fundamental unmet medical need and we’ve been pleasantly surprised by how rapidly the uptake has gone in the U.S.

Barry Scott: The volumes continue to grow month over month at the sites we’re producing at today.

HCB News: Is Axumin currently being reimbursed?
Jonathan Allis: When we started the company in 2014, we weren’t overly worried about technical issues or regulatory approval. We were worried it wouldn’t be paid for. If you look at the history of reimbursement for PET imaging agents, it hasn’t been pretty. It’s taken a long time to get reimbursement for certain PET agents while others are not reimbursed.

So, we were very fortunate to have the reimbursement process go smoothly for Axumin. We put together dossiers on how it works and contacted local Medicare contracting committees and presented the data and got a very positive response. We’ve had a permanent HCPCS code (A9588) since the beginning of this year, meaning it is covered by CMS for the Medicare population across the U.S., so that removes a big barrier from product adoption.

People hear about Axumin and say, ‘Yes, we need that.’ Then they say, ‘Well, is it available near me?’ And, of course, PETNET is doing a lot to turn that answer into, ’Yes.’ Then they ask, ‘Is it reimbursed?’ And the answer to that is, ’Yes’ as well.

It speaks to the utility of the product – you don’t get products that are not useful reimbursed and we’re extremely pleased that this has all gone so well.

HCB News: What is the half-life of Axumin? Must it be administered to patients within a tight time frame? Did these factors influence your decision to choose PETNET Solutions, Inc., as the radiopharmaceutical’s exclusive U.S. commercial manufacturer and distributor to imaging centers?

Jonathan Allis: Axumin is labeled with fluorine-18 which has a half-life of 110 minutes so it’s the same isotope that is used for FDG, which is the most common PET imaging agent by far – so Axumin plugs directly into the same distribution network. With FDG, you wait an hour or so after injecting the patient, but with Axumin you inject and scan within three to five minutes, so it’s a different process.

There are a number of radiopharmacy networks in the U.S., but I think PETNET has the largest footprint, so that factored into our decision to partner with them. They also have a genuine passion for PET – you want a partner who believes in your product as much as you do, and is not just doing it as a job, but as a mission – we love working with PETNET.

HCB News: How many metropolitan locations in the U.S. currently offer Axumin, as of April 2017? Does PETNET Solutions, Inc., plan to add more sites in 2017? (A February press release indicated that two sites offered Axumin in June 2016 when it was approved by the FDA. That same press release from February indicated that 12 sites were now offering the radiopharmaceutical – with more sites slated to be added in 2017.)

Barry Scott: As of right now, Axumin is available from 16 production sites, and PETNET Solutions plans to add several more sites in the next year. With the success we’ve had with product adoption, we’re going to step up expansion, but even as of today, we can provide Axumin to a majority of U.S. imaging centers.

We have work going in a number of interesting areas. The data we have in brain tumors, particularly gliomas, looks pretty good and we’re starting to pull all that together to file for that indication. We currently have an orphan drug designation from the FDA as well as the European Community for glioma.

Also, some types of breast cancer are not imaged well with existing radiopharmaceuticals, and we think Axumin may be interesting in those areas, so we will continue to investigate them.