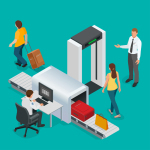 by Philip F. Jacobus, CEO
Some of you might remember smoking on airplanes.