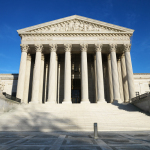 The Supreme Court, the Lexmark case and implications for the health care industry

At the heart of the case is the right of consumers (and businesses) to own the goods outright that they purchase, protected by the first sale doctrine which limits the patent rights of the manufacturer. These elements have 150 years of standing and help to keep in check the threat of monopoly by the product makers. The underpinnings of modern-day commerce can be found in these doctrines that allow for consumers to own what they buy outright, and to trade and resell and repair what they own.

Essentially a power grab in the works, Lexmark was attempting to extend its patent rights post the sale of the printer cartridge. If successful in court, this had the potential to give manufacturers control over their products, through patent claims and litigation, well after their products were sold and Lexmark has been paid its price by the purchaser.

When the Association of Medical Device Reprocessors (AMDR), the global trade association representing the interests of commercial medical device reprocessing and remanufacturing companies, learned of the court rulings leading up to the U.S. Supreme Court case, we took action. AMDR joined advocacy groups, nonprofits and many leading technology companies and filed an amicus curiae (friend of the court) brief in support of Impression Products to underscore the importance of the long-standing ”first sale” doctrine at issue in this case.

In its brief, AMDR highlighted that, for over 150 years, the law has encouraged the right of consumers to reprocess, repair, recycle or resell their property as they see fit.

AMDR believes we have a duty and obligation to promote the safety, savings and sustainability benefits brought to health care by the medical device reprocessing industry, and we could not overlook any prospective threat to the industry or to our health care partners, so we filed the brief with the court.

AMDR members have been selling safe, lower-cost, FDA-regulated, reprocessed medical devices for 20 years. In addition to relying on FDA requirements, we’ve relied on the long-standing first sale doctrine to remanufacture medical devices that help reduce waste and that cost up to 40 percent less than original devices.

Ultimately, the Supreme Court ruled in favor of Impression Products, and reasserted the first sale doctrine and patent exhaustion.

The Court’s ruling is a huge win for the reprocessing industry and affirms that reprocessors and remanufacturers have the right to repair and refurbish medical devices without fear of patent litigation from manufacturers.

And it isn’t just a win for secondary market players such as reprocessors. This is a huge victory for consumers. In the context of the health care industry, it’s a win for the hospitals and surgical centers that are saving money by extending the lifespan of the medical equipment they already own through reprocessing. The benefits of the court’s decision extend not just to remanufacturers and the like, but also to health care consumers and to Americans looking to lower their own health care costs.

This is because there are competitive benefits that stay in place as a result of the ruling. Yes, original manufacturers are entitled to make a profit from the sale of their equipment. Device manufacturers make good products, but that doesn’t mean that the only ones allowed to repair and reprocess those products are the original manufacturers. Competition is a good thing. Commercial reprocessors provides competitive market pressure to help lower the cost of those products.

In the context of the health care industry, it’s likely that some original equipment manufacturers (OEMs) are going to try new contracting or licensing arrangements which may purport to benefit the customer, but ultimately drive up costs for hospitals and surgical centers. We’ve seen time and again instances of how manufacturers have tried to thwart reprocessing of their original devices by employing crafty contracting tactics that may ultimately force hospitals into minimum purchasing agreements, exclusive arrangements with the OEM or otherwise restrict the hospital from repairing or reprocessing its own devices.

In response to this pushback from manufacturers, we’re asking our hospital and surgical center partners to be mindful of new contract provisions so as not to fall prey to any language that would restrict their right to repair their medical equipment and to purchase reprocessed medical devices and products. Are your vendors committed to helping your facility reduce costs and waste? If not, maybe you should evaluate who you're working with.

The U.S. Supreme Court ruling effectively removed the latest challenge to the right to repair and refurbish, and the threat of patent litigation from manufacturers. The playing field between consumer and manufacturer is once again level. Let’s keep the momentum headed in that direction.

About the Author: Dan Vukelich, Esq., is president of the Association of Medical Device Reprocessors.