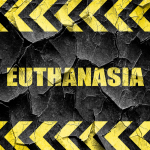 by Sean Ruck, Contributing Editor
As long as there are people alive, it’s nearly a guarantee that there will be debates about life and death.