One of vRad's 540 teleradiologists provides
diagnostic insight to a referring client.

The benefits of utilizing teleradiology

by Lauren Dubinsky, Senior Reporter
For many smaller radiology clinics, or those in rural areas, having staff on hand 24/7 to read imaging reports is a luxury they simply can’t afford. Fortunately, with digital images and internet connectivity, an interpreter for those late night scans can be just a click away.

“We have great subspecialty expertise during the day, but it’s hard to replicate it 24/7,” said Dr. Ricardo Cury, chairman and CEO of Radiology Associates of South Florida (RASF), a private practice group that partners with a teleradiology provider called vRad to address the issue.

Both RASF and vRad are owned by MEDNAX, a Florida-based national health solutions company with a focus on specialists.

With multiple locations, RASF is able to leverage its teleradiology workstations so that its providers in one facility can ensure subspecialty services at another. Using this approach, its radiologists in Miami are supporting the team at a new location in Naples.

“When you have a small [practice], it’s hard to have all specialties,” said Cury. “That is where the Miami radiologists are able to add value to the Naples practice.”

With 540 teleradiologists in all 50 states interpreting scans for approximately 2,100 facilities nationwide, vRad is responsible for roughly 6.5 million reads per year.

“The most common relief valve for the rural radiologist is the after-hours call coverage component – i.e. emergency radiology,” said Kent Thomas, vice president of business development at vRad. “We will cover the after-hours component for them, which allows them to focus more on the daytime reads and staff more efficiently.”

With 20 to 25 teleradiologists covering 15 states, Argus Radiology is a comparatively small teleradiology provider, but the company views its size as an asset in building stronger relationships with its clients.

“Our business model is supporting other radiology groups when they are not able to get to those rural hospitals that are under their contract or [providing] after-hours [reads] for groups that have problems hiring new radiologists because they don’t want to work overnight,” said Todd M. Moritz, director of new business development at Argus.

Another longstanding leader in teleradiology is ONRAD, which traces its roots back to 1998. (vRad was founded in 2001 and Argus in 2009.)

Partnering with a teleradiology provider means eliminating concerns for continuing education or staffing shortages from sick time or vacation, said Anthony Freire, ONRAD’s chief operating officer. His company staffs about 43 teleradiologists who can fill scan interpreting needs for facilities that don’t have enough patient volume to justify the high cost of an on-site radiologist.

Today, teleradiology companies are securely connected to hospitals, so that images can be transferred safely. In addition to this, image transfer times are dramatically reduced, meaning the benefits are increased for providers using the service.

“Back when teleradiology first started, a radiologist would need a T1 line installed in their house,” said Moritz. “Even at that time, transferring images was very slow with these multi-slice images that were being transferred. Today they can be compressed, delivered to us, and unzipped in a matter of seconds.”

ONRAD’s Freire added that the standardization of HL7 and DICOM allows teleradiology reports to be uploaded into the facility’s electronic medical record instantaneously for use by the ordering physician.

In the last three to four years, vRad has implemented a tool that provides the on-site radiologist with access to the company’s operation center via the platform’s reading workstation.

If a vRad teleradiologist dictates a positive critical finding, the platform recognizes via natural language process that there is a need to call the referring physician. A pop-up window then asks the radiologist if they would like to make the call.

“There is a very sophisticated implementation process that allows that functionality to happen, which improves the efficiency and accuracy of the interpretation and the quality of the outcome,” said Thomas.

Your choice of PACS matters
In nine months, Radiology Imaging Solutions, a Michigan-based teleradiology provider, doubled the number of imaging sites it provides reads for, increased productivity by 400 percent and reduced report turnaround times by more than 50 percent. They credit the dramatic improvement to replacing an antiquated PACS system with Konica Minolta’s Exa PACS.

Konica Minolta's server-side rendering technology allows radiologists to read large files, such as 3D mammography, faster because they don’t have to wait for a study to load.

“The radiologist can complete an interpretation in one-fourth the time with Exa compared to our prior PACS,” said Robinson.

Exa also allows teleradiologists to customize their worklists, hanging protocols, relevant priors, report templates and report delivery options. When they log into Exa on their workstation, the studies on the worklist are sorted, based on their preference, and the appropriate report template and voice recognition software are opened automatically.

“When we were using the old system, I would get almost daily calls from the radiologists, complaining, making excuses and explaining why they are behind on the teleradiology readings,” said Robinson. “Now, I don’t get those calls, but about once a week, I do get a call from the teleradiologist on duty, thanking us for investing in them.” 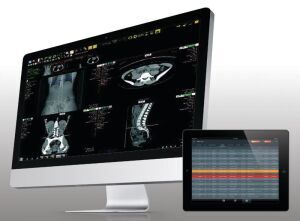 The communication conundrum
One of the limitations of teleradiology is a lack of face-to-face communication, which affects both the onsite radiologist and the patient. Fortunately, teleradiology providers have developed some unique ways of addressing that.

Argus attempts to overcome this communication hurdle by establishing close relationships with the facilities they cover. They do this by limiting the number of teleradiologists who are accountable for a given client provider.

“Rather than having a different radiologist every day, we try to have the same radiologist reading on the off hours so there is a relationship that gets established between the facility and our radiologists,” said Moritz.

He added that customers he meets with at trade shows tell him that they feel as if they have known his teleradiologists for years, even though they have never seen their faces.

For women’s imaging in particular, where there are often a lot of follow-up questions and sometimes follow-up exams, good communication is a critical component of the diagnostic process. For that subspecialty, vRad started offering “live diagnostics” for remote radiology practices about two years ago.

The vRad teleradiologists select one or two days per week and a four-hour window in the afternoon to video conference with the patient and onsite technician in real time.

Will all radiology become teleradiology?
While the benefits of outsourcing image interpretation are abundant, especially for providers who are feeling stretched for resources, it doesn’t mean that it makes sense as a complete replacement for on-site service.

“There still need to be people in the department because of the sheer volume of studies that most facilities have,” said Thomas. “Radiologists on-site provide the interventional services, women’s imaging, supervision, technologist training, as well as interaction with administration and referring physicians, and attending tumor boards.”

Instead, he believes that the communication between teleradiologists and facilities will become increasingly fluid, to the point where interaction will be even more efficient and patient outcomes will be improved as a result.

“It is quite difficult for a solo radiology practice to meet all subspecialty requirements their facilities are now beginning to mandate,” said Thomas. “The only way to provide subspecialty coverage in this environment is to leverage technology in an intelligent fashion to eliminate the seam between the on-site radiologist and [teleradiologists].”