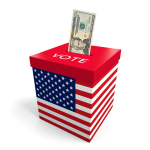 by John W. Mitchell, Senior Correspondent
When radiologists make political contributions, they mostly give to political action committees, with the Radiology Political Action Committee (RADPAC) far and away the preferred organization.

Burnes added that this is important, given that 90 percent of Congress consists of non-health professionals. He said most MOCs don’t understand healthcare nuances, let alone a specialty such as radiology. RADPAC contributions create an opportunity to form congressional relationships, which are vital for advocacy. For example, Burnes said they were able to educate MOCs on the importance of mammography insurance coverage beginning at age 40. RADPAC helped turn back an effort to raise the age to 50.

“Look, this (lobbying) is a competitive, full-contact sport. There are over 4,300 PACs in DC. It's hard to get one's voice heard with all the noise,” Burnes said. “Having a large, well-established PAC that builds relationships on both sides of the aisle, in both chambers, offers the profession the best representation possible to protect itself.”

Patel agreed, noting that there are many competing interests in Washington, D.C. She said that RADPAC also provides education on radiology advocacy across the country and arranges site visits so that radiologists can visit their elected representatives. Such activity not only advances the specialty but also helps to serve patients, Patel said. While the study found that only about 10 percent of practicing radiologists contribute to RADPAC, she thinks this may increase as healthcare becomes more competitive in the political arena.

“It's wonderful to see that radiologists are coming together to put their profession first, regardless of political affiliation,” said Patel.