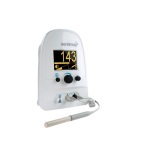 by John R. Fischer, Senior Reporter
Biopsies of lymph nodes for confirming the spread of breast cancer may soon require no radioactive injections, according to Endomagnetics Inc., following the FDA’s clearance of its Magtrace and Sentimag Localization System.

Utilizing a magnetic tracer known as Magtrace, the solution is able to identify sentinel lymph nodes in patients undergoing mastectomies, enabling clinicians to surgically remove them to determine if the cancer has indeed spread, without resorting to the conventional approach of injecting radioactive materials or blue dye.

“Radioactive tracers have limited availability to larger hospitals, and the short half-life of the isotope means that the injection has to be scheduled to coincide with the surgery,” Quentin Harmer, CTO of Endomagnetics, told HCB News. “Any disruption to the supply or scheduling will cause delays in surgery for patients. Tracer injections are also considered very painful and uncomfortable for patients while blue dye tracers are associated with severe allergic reactions in some patients. Magtrace is a non-radioactive alternative that has been developed to improve the process for both patients and surgeons.”

Biopsies of sentinel lymph nodes are crucial to monitoring the progression of cancer, as they are the first organs of the lymphatic system to which cancer cells are most likely to spread to from a primary tumor. Such procedures enable clinicians to identify, remove and examine lymph nodes to determine where cancer cells are present.

The Sentimag system guides these operations with the use of a sensitive magnetic sensing probe and base unit, and small amounts of Magtrace, whose particles are small enough to move quickly through the breast, yet big enough to be filtered by the first sentinel lymph nodes where they become physically trapped.

Clinicians can then apply the probe to the skin, close to the site of the tumor containing the lymph nodes, to pick up magnetic signals from the tracer to accurately target and remove them without disrupting the rest of the nodes in the armpit. Detection of signals are depicted as changes in audio and visual alerts from the base of the handheld unit.

In addition, the dual nature of the tracer enables it to display color for visualization of the node to further help in locating and removing it. It also can be injected up to a week before surgery, enabling it to be decoupled days beforehand, thereby sparing patients the ordeal of an additional procedure the same day and providing the hospital with better scheduling.

The FDA evaluated the system using a coordinated, cross-agency approach and data retrieved from a trial of 147 breast cancer patients, comparing its efficiency to that of injections of blue dye and radioactive materials.

All patients underwent both methods with the Sentimag System scoring a 94.3 percent rate for lymph node detection, compared to injections, which scored 93.5 percent. An overall 98 percent of patients had the same rate of detection with both.

The use of Magtrace adds sentinel node detection capability to the Magseed lesion localization marker that has been available in the U.S. for two years. The system can also be used to localize primary cancer while locating sentinel nodes, allowing hospitals to reduce radiation exposure, increase patient convenience, and further simplify workflow.

“Magtrace is truly unique, in that it is the only tracer in the world that can be injected days before the surgery, without marking any higher echelon nodes. This not only improves scheduling and the patient experience, it also allows the surgeons to carry out new techniques, such as a delayed sentinel node biopsy for patients with DCIS undergoing a mastectomy. This has the potential to spare the patient the need for an unnecessary intervention in the axilla that is of no benefit to them.”

The injection of Magtrace directly into the bloodstream may steer it away from injection sites such as the liver or spleen, causing image artifacts to appear during MR exams. This effect has not been reported in X-ray, PET, CT, PET/CT or ultrasound imaging studies.

It should also be noted that the Sentimag System is contraindicated in any patient with hypersensitivity to iron oxide or dextran compounds, and is not recommended for those with iron overload disease or metal implants in the axilla or chest.

The most common adverse event found during the study was breast discoloration in patients who underwent mastectomies, suffer from bradycardia or had potential allergic reactions to the magnetic materials. The effect was reported to have disappeared three months later.