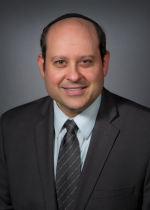 by Sean Ruck, Contributing Editor
HCB News has interviewed Dr. David Hirschorn a number of times over the years to tap into his expertise and to get updates on the New York Medical Imaging Informatics Symposium, a conference he founded.

Our recent conversation was filled with great information and some laughs as we talked about NYMIIS and this year’s event coming up on September 17 at the New York Marriott Marquis in New York City.

HCB News: Before we get into the specifics of this year’s conference, I have to ask: how much time do you dedicate each year to pulling it together?
David Hirschorn: That’s an easy answer – as much time as it takes! It’s a lot. It’s hard to quantify. I weave it in amongst my other job responsibilities. When the meeting is over in September, there’s usually not much cooking for the next three months, so I get a break from planning for the next year. By the time January rolls around, I have to start planning with picking a date, getting the hotel contract going and things need to start happening at that point. When SIIM ran it last year, what a pleasure! I gave information and ideas and suggestions, but they took care of the logistics. I’ll make no bones about saying that I miss that. While they thought it went well and have interest in looking at New York again, they like to move their regional meetings around, so I’m running the conference again this year. So there’s a lot for me to do again, but not as much as in the past. I have a lot of people helping me out.

HCB News: I saw a lot of the usual suspects among the speakers, with many being from the area – New York, Massachusetts, Virginia, Maryland and then there’s Qatar. How did Dr. Rizvi come into this?
DH: A lot of things aren’t what they seem! First, regarding Massachusetts . . . Dr. Pomerantz does work at Mass General, but he lives in New York and commutes to Boston, so he’s actually local. As far as Qatar goes, there’s something in common between Dr. Morey and Dr. Rizvi. They’re bother former residents of mine from Staten Island and they both went into informatics later. Dr. Morey works in Virginia, does work for IBM and other companies. Dr. Rizvi skipped fellowship and went straight to work for Qatar. They were building a new medical center in Qatar and wanted it to be cutting-edge (pun intended), and they wanted someone to build up all the informatics on the radiology side. So they hired him straight out of residency to build everything. He had the rare opportunity to start everything fresh at a new institution with the money and desire to have the best. It was a once-in-a-lifetime opportunity and he took it. So I asked if he would come back and talk about what he did out there.

HCB News: Is there a theme for this year? I know your tagline is “Best Practices in Imaging Informatics,” but is there a theme?
DH: You can see from the agenda that there’s a focus on artificial intelligence and machine learning. At least two of the talks and the vendor panel are focusing on that, so if anything would be a theme, I’d say it’s that.

HCB News: When you’re putting the agenda together, are you working on talking about the future?
DH: The reason I kept the same tagline from the start, “Best Practices in Imaging Informatics,” is because it endures. Best practices are constantly evolving, so the talks are around what’s going on and where things are going to work best. We don’t have lectures about historical reviews, it’s not about learning history. It’s not even about a comparison of regional practices of radiology or informatics because I’m not interested in a difference just for the sake of the difference. I’m interested in sharing about what’s working best. What is the way to give the best patient care in the future? What changes can you make to practice better? That’s the focus we’ve always had. What changes is what constitutes those better practices.

HCB News: Is there a lot of audience participation during the presentations at NYMIIS?
DH: It’s designed to be that way and it is that way. It’s rare that there’s silence when the speaker asks if there are any questions. Usually, hands go up or there’s a line at the microphone. It’s a point of pride for me to have that participation and interest from attendees.

HCB News: Is there anything we haven’t covered that you’d like to talk about?
DH: Yes. One of the things we first did in 2015 that we’re bringing back in 2018 is the academic posters. To me, that was a beautiful part of the meeting. I like the ability for people to submit abstracts and present posters. It gives researchers a venue to get ideas and research out there. I love watching conference attendees spending time reading posters, looking at what people present. Lectures are wonderful, but posters are like a buffet. You can go right to what interests you and dive right in. We give prizes to compete for too. It brings out the best in the researchers and piques the interest of the attendees. It’s a gem of the meeting and I’m really happy to bring it back.

For more information about the conference, visit nymiis.com