by John W. Mitchell, Senior Correspondent
Don Stephens grew up on a Colorado ranch and had never seen the ocean. But as a theology student on a mission to the Bahamas, he had a vision: he wanted to use the seas to bring medical services to some of the world’s most desperate people. 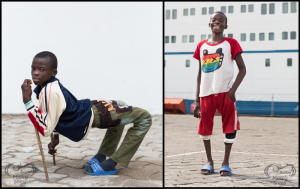 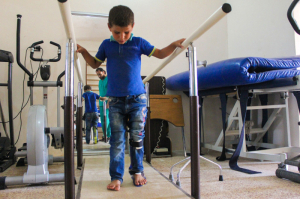 Patient at orthopedic rehabilitation clinic in Syria.
Project C.U.R.E. also began when its founder, economist Dr. Jim Jackson, saw firsthand, the disparity in health and service in the slums of Brazil.

“What he saw there moved him to his core. He witnessed communities without healthcare, doctors without resources and people without hope,” Elizabeth Olsen, manager of national procurement told HealthCare Business News. “Every day we strive to provide our partners around the world with the medical tools they need to sustain, build and thrive on their own.

She recently said, during a visit by a facility accessor to one built in Zambia in 1957, that patients were still being treated in an original operating suite. This included an operating table from 1956, no overhead lights and no working anesthesia machine. This, for a service population of 165,000 people. The accessor watched a surgeon performing a bowel obstruction surgery wearing a headlamp. 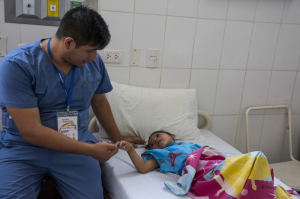 Patient in pre-op in Bolivia.
“Upon delivery of a Project C.U.R.E. container, filled with … medical supplies and equipment, the hospital installed a newer operating table, a portable light, a cauterization machine, a patient monitor and a newer anesthesia unit. It was a win for the hospital and the community,” said Olsen.

Olsen added that there is a substantial return on investment of $363,000 for each 40-foot container delivered to a community. The local provider saves, as the monetary savings on such donated equipment and supply costs can be redirected to the facility and staffing.

She said that in recent years they have seen a growing demand for portable imaging and surgical equipment.

Donated medical equipment and supplies are key
Clinics serving the poor usually have no running water, no supplies or medicines, and few beds or exam tables. Patients often receive care on the floor, which is unsanitary and dangerous.

“As a Christian humanitarian organization, World Vision U.S.’ mission is to help the most vulnerable children around the world. This means we work in some of the most impoverished and least developed countries, where health statistics are appalling,” said David Scheiman, the group’s senior technical advisor for health. “No organization has enough funding to meet all the need, and that's where donated equipment and supplies come in.” 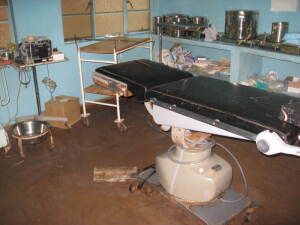 OR theatre in zambia
World Vision’s original focus was to build hospitals and provide staffing, but that function transitioned to local governments providing bricks and mortar and staffing, while the group focused on providing training. They also provide supplies and equipment that those hospitals have difficulty obtaining.

The delivery room is an area where they feel they can make a significant impact with simple solutions. For example, Scheiman said, a recent study found that newborn deaths can be decreased by 41 percent with good handwashing habits, so they are teaching those protocols.

Today, World Vision sends 40,000 pallets, much of it maternal- child health supplies, to 35 to 40 countries a year.

Scheiman also said that over the past five years they had had significant success in treating child malnutrition. In that time, World Vision has treated 1.5 million children with severe, acute malnutrition, with 89 percent of those children making a full recovery.

“We can restore them to full health in two months. I think sometimes people see the news and photos from around the world and think things are hopeless, but that just isn’t the case,” he said. “Worldwide, the infant mortality rate, maternal mortality rate, and malnutrition rates have all decreased by more than 50 percent since 1990. So, we’re making incredible progress. But a lot still needs to be done. The good news is we know what works.” 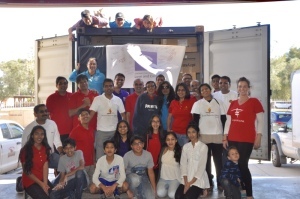 Project CURE
From biomedical equipment training to disaster response
MedShare, a national nonprofit that also redistributes contributed medical supplies, uses a multi-prong strategy in its mission to improve global health in 100 countries – including the U.S.

“There is an enormous amount of need in medically underserved communities around the world,” said Charles Redding, CEO and president. “There are qualified healthcare providers in these areas losing patients all because they don't have the supplies and equipment they need to save lives.”

MedShare’s Primary Care Program supports health clinics in the U.S., while its medical mission teams travel the world to help provide services in underdeveloped areas. In the wake of last year's devastating natural disaster season, the group assisted more than 200,000 patients in Puerto Rico, Mexico, Dominica and ten other countries and territories.

MedShare donated medical aid to communities in 12 countries and territories in the last four months of 2017, all of which were struggling to support sick and injured patients in the wake of disaster. The organization also operates a Maternal and Child Health Program, which Redding said had a significant impact for a Central American community.

“In 2016, there were a total of 49 neonatal deaths in the rural community of Chontales, Nicaragua,” he explained. “That is 49 infants who didn’t survive their first 28 days of life. In 2017, following our partnership with AMOS Health & Hope, that number decreased from 49 to 29 – a 40 percent reduction.”

MedShare programs are among the top one percent of all U.S. charities to rank as a Charity Navigator 4-Star rating for 13 consecutive years. The organization has trained more than 6,200 biomedical engineers, technicians, and end-users on how to use, repair and maintain lifesaving medical diagnostics and biomedical equipment. 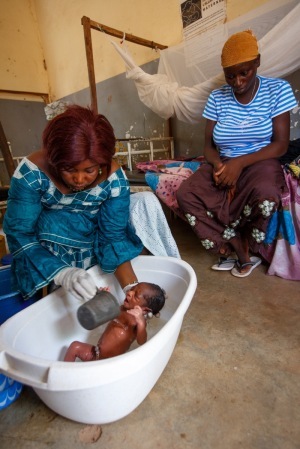 An obstetric nurse at a health center in Mali washes a
newborn baby for the first time in the maternity
section of the clinic, thanks to donations the clinic
now has cleaning supplies to better
Baker, with Mercy Ships, said that on their last deployment to Cameroon, they provided 2,746 free surgeries, which included orthopedic, maxillofacial, plastic reconstruction, general, ophthalmic and women’s health surgeries. Mercy Ships relies on shipboard volunteers, from the crew to the physicians, to carry out their mission. All of this accomplished under the supervision of their Chief Medical Officer, Dr. Gary Parker, a maxillofacial surgeon who has held that volunteer position for 30 years.

“Our patients are the poorest of the poor,” said Baker. “We’re not just healing, we're restoring hope. This is true whether it’s removing a 16-pound tumor from a man’s jaw, providing plastic surgery on a child who fell into a cooking fire or fixing the bowed legs of a teenager who can stand upright for the first time in their life.”

How to support these medical equipment, supply, and health service organizations

Individuals and organizations are always needed to support programs as volunteers at centers in Atlanta, San Francisco, and New York. Corporate groups can also support the Mother and Infant Clean Birth initiative with an on-site, volunteer event.

Sign up to serve as a crew member, or as part of the clinical team. Cash donations are also needed, which can be also be designated in support of a volunteer crew member.

Medical equipment and supplies, container shipping, or warehouse staff to sort and load are much needed and welcome.

Companies can dispose of unneeded surplus equipment and supplies without a fee. Individuals can support mothers, children, and families via cash donation.