Why randomized trials for proton therapy are difficult to complete

Randomized, controlled clinical trials are the gold standard of cancer research and can shed light on whether innovative, new therapies with great potential actually have clear benefits over usual care for patients. However, the seven randomized trials funded by the National Cancer Institute (NCI) and the Patient Centered Outcomes Research Institute (PCORI) to test proton therapy are enrolling more slowly than expected. Commercial insurance medical policies that do not cover treatment with proton therapy can make it difficult for patients to participate in randomized clinical trials funded by the NCI, part of the National Institutes of Health, that are evaluating the therapy. This is the biggest barrier these trials face, but as my colleagues and I recently laid out in a commentary in the Journal of Clinical Oncology, there are concrete steps we can take to improve this situation.

It's important to note at the outset that most commercial insurers and state Medicaid plans do not cover proton therapy for the cancers under study in these seven trials, though Medicare typically does through local coverage determinations. While coverage policy is an important tool that can reduce inappropriate use of medical technologies, it can also create barriers to evidence development: in the case of proton therapy, coverage policies on proton therapy prevent patients from participating in the seven randomized clinical trials sponsored by the NCI and PCORI and specifically designed to answer crucial questions about the treatment’s benefits and harms.

Currently, six of these randomized trials comparing proton therapy to photon (X-ray) therapy are funded by the NCI, with the seventh funded by PCORI. All of these trials have faced enrollment challenges. For example, in the RadComp trial for breast cancer, nearly two-thirds of eligible patients have insurance coverage policies that do not cover proton therapy for breast cancer; thus, the majority of eligible patients for RadComp cannot actually enroll and participate in the clinical study. While it is true that Medicare typically does cover proton therapy, thus allowing patients to participate in trials, inclusion of only Medicare-eligible patients over 65 significantly limits the number of patients who can participate in the trials and may reduce the generalizability of the results.

These seven trials have been specifically designed to provide evidence comparing proton and photon therapies, and future patients will benefit directly from the knowledge we stand to gain. The sooner we complete these trials, the sooner patients, hospitals, and insurers will be able to use the results to make more informed decisions.

All three groups of stakeholders – patients, hospitals, and insurers – are aware of the dilemma and are attempting to find solutions. Some commercial insurers and some proton centers and hospitals have made arrangements to cover proton therapy for selected cancers under study. For example, some insurers have established coverage with trial participation policies. We propose an approach that leverages the lessons learned from these successful experiences. 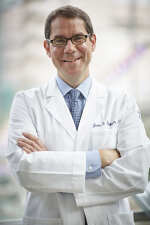 Dr. Justin E. Bekelman
The goal is to bring together public and private insurers, proton therapy centers, hospitals, radiation therapy equipment vendors, and patient advocates to establish a program of coverage that includes participation in one of the seven trials. If this effort is successful, it can serve as a model to evaluate new advanced technologies in the future.

About the author: Dr. Justin E. Bekelman is an associate professor of Radiation Oncology and Medical Ethics and Health Policy and senior fellow in the Leonard Davis Institute for Health Economics at the University of Pennsylvania’s Perelman School of Medicine.