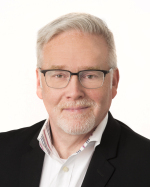 by Sean Ruck, Contributing Editor
Patrick Flaherty has worked in the healthcare arena edging toward two decades. During our discussion regarding some of the challenges and roadblocks put into place for affordable care, the term “healthcare arena” feels particularly apt.

HCB News: How involved is BioTronics in decisions regarding capital equipment purchases?
PF: Significantly. There are two clinical capital budget processes at UPMC. One is a fleet replacement budget which is a discreet budget. BioTronics was the originator of the fleet process here across UPMC as an enterprise, and it was so successful that we have a dedicated fleet budget every year. For the remainder, which is a routine capital budget, BioTronics is hardwired into the rec approval process. So anything that is included as clinical capital auto-routes to BioTronics before any other approver. So from a systems perspective and from a strategy perspective, we are at the table.

HCB News: What role are you being asked to play in hospital cybersecurity?
PF: That’s an increasing role. IT here publishes a standard. They issue audits and risk audits on virtually every kind of cybersecurity threat. So every user gets audited on that standard. The problem I have with that [is that] I can have a standard, but as long as the supplier community does not offer a compliant solution, the standard is meaningless. So increasingly, the IT department is asking me to be more responsible, not less. I do not control laboratory equipment, for example, and they want me to now extend my control into the laboratory space because that is a space that is even more difficult as it relates to cybersecurity.

HCB News: Are you satisfied with the data you are generating for asset management?
PF: We are actually increasing the quality of the data. So UPMC has a group called Pensiamo. It was a wholly-owned division of UPMC supply chain, but it is an analytics department that uses artificial intelligence, machine learning, ETL, every tool available in order to create cognitive and predictive analytics. We are running our proprietary CMMS data, so we use our homegrown data. And we are using that to create a cognitive analytics platform for clinical medical equipment.

The data we have is robust, and because of the nature of clinical medical equipment, it needs to be longitudinal. We have three and a half decades of longitudinal information, whereas most organizations do not. The data is normalized and captured at the individual asset level, so we have very specific and very broad information. That fleet management process that I described earlier uses a proprietary algorithm that we created, which we call a replacement priority value.

HCBN: Are you happy with the relationship you have with OEMs? How could it be improved?
PF: It’s transactional, by and large. The problem we have on the clinical medical equipment side is that in a fee-for-service world on the diagnostic imaging side, all you did was turn the thing on and you got paid for using it. There’s really no connection, certainly no evidence of connection between the use of a piece of equipment and the value it creates. It’s very difficult to get an evidence-based set of information which would allow you to evaluate the value generation of a piece of equipment, and that’s a problem.

For the most part, every one of the diagnostic imaging equipment manufacturers is driving 30 to 55 percent margin on this equipment, and then that price point is used to establish the full service contract that they sell at a percentage of acquisition cost. You have an inflated acquisition cost which is not based on any rational connection to margin or value for the customers and it’s compounded that they’re using that acquisition cost to establish a service cost that is also designed to excessively drive margin to the OEM.

HCB News: From an HTM perspective, what are the pros and cons of working with ISOs versus OEMs?
PF: If it’s in-house, you’re not margining your labor. The vast majority of your variable expense that you can cover in this space is labor. You are going to be stuck with an OEM for a part at some point, you could use third-party parts or you could venture into refurbed parts. But eventually what you’re going to have is an OEM selling you a solution that is based on them marking up labor. As it relates to an ISO, you have to be very careful to be fair to the OEM and to evaluate the service level you’re receiving. You would need to make sure that the ISO is getting the same quality of training as the OEM is providing its own individuals.

There are ISOs out there that are not making 50 percent margin, but they are still marking up parts 30 percent. So I would say an ISO doing something as arbitrary as that is moderately if at all better than an OEM driving the same kind of practice. There’s opportunity, but you have to know what you’re doing in order to make sure you’re not trading quality for expense reduction.

HCB News: In the wake of the FDA report finding insufficient evidence to regulate non-OEM equipment stakeholders, do you feel that new standards or regulations are needed to address patient safety or improve relations between OEMs and other equipment stakeholders?
PF: The first problem is that there was never any information that would suggest that the FDA should even be looking at it. The MAUDE database showed no evidence that there was a problem with the ISOs that would suggest the need for a regulatory overview. In fact, ECRI came out and said that the evidence in the MAUDE database was actually decreasing, not increasing. So it was a trumped up review by the OEMs through MITA designed to drive costs up or ISOs out. So that was the goal.

When it didn’t pan out, the FDA came back and said ‘fine, then we should evaluate standardizing the use of a quality management system for ISOs as a means of getting a standard of performance.’ Once again, a standard of performance that is based on what deficit? There are certainly situations where there are ISOs that are underperforming that ought not to be performing anything. But at the end of the day, having the FDA come out and say that the OEMs are the ones who should be assessing and defining what kind of quality management system is going to be used by in-house quality management systems or ISOs is tantamount to letting those organizations decide exactly how they can overburden their primary competitors.