by Sean Ruck, Contributing Editor
There has been some handwringing over the evolution of AI and its elevated role in imaging. Some radiologists are concerned that much like technology displaced people in the automobile industry decades ago, or in settings like grocery stores more recently, their careers could take a hit. Yet, the results of some recent work between Stanford Medical University and Dr. Louis Rosenberg’s company, Unanimous AI, may serve to set their minds at ease.

While the study showed a purely algorithmic-based system could outperform human doctors, Rosenberg felt those results didn’t paint a full picture. “What if we took a group of doctors and used swarm AI to amplify their ability – would that take the crown back for the humans?” he asked.

And that’s what happened. What the trials with a swarm AI showed was that a small group of doctors connected in real time outperformed the purely machine-based learning system by 22 percent. “It was 22 percent more accurate, which goes to show it’s too early to say human doctors can be replaced,” Rosenberg said.

Instead, he believes the key to better performance is in approaching the problem just a little differently. For swarm AI, the system doesn’t train on medical data. Instead, it takes a group of radiologists (in the case of the Stanford study, eight radiologists) and connects them in real time to look at X-rays. The radiologists can be all over the country or across the globe for that matter. They sit in front of their individual computer screens and work together with AI algorithms guiding the group. Working together as a swarm, they had 33 percent fewer errors than a radiologist working alone and the aforementioned 22 percent improved accuracy over the solo AI. According to Rosenberg, it comes down to experience and inference. While AI can gain “experience” via digesting data, the inference isn’t there; and while radiologists might not have the tens of thousands of images in experience stashed for immediate recall, they have the creativity and inference. “Humans are really good at that and by connecting groups of human doctors, they become super good at that,” Rosenberg said.

He says there are two flaws with machine systems. First, the huge amount of data needed to feed into the system to ensure it doesn’t run across things that are unfamiliar. Second, the ground truth that’s needed. Currently, the second need relies on a human doctor to fill that gap. A hive mind should be able to create the ground truth for systems, giving more accurate data to train on, but algorithms still have a long way to go before they attain the same level of inference that humans have. And that’s why Rosenberg believes human doctors contributing to a hive mind will continue to do better. 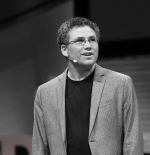 Dr. Louis Rosenberg
A drawback, of course, is the financial aspect. While the time spent per image is roughly the same, it’s roughly the same multiplied by however many radiologists are contributing. Rosenberg believes similar results can be achieved with fewer radiologists and that is being investigated. But he also believes even with multiple radiologists working on a case, the reduction of false positives can reduce unneeded procedures, substantially creating savings. So at least for the time being, radiologists shouldn’t be concerned about the rise of the robots.