Making the 'virtual biopsy' a reality with MR spectroscopy

To date there are over 28,000 publications that detail the use of MR spectroscopy for a wide range of neurological disorders, however, this promising technique has not been fully utilized in clinical practice. Recent advances in technology are addressing these issues to translate MR spectroscopy from the benchtop to the bedside.

MR spectroscopy is ideally suited for repeated measurements and for measuring therapeutic outcomes by obtaining chemical signals, or metabolites, from a region of interest. A spectrum of peaks is generated whereby each peak is reflective of a chemical that resonates at a specific frequency (described in parts per million or ppm); the height of the peak reflects the concentration of that chemical in the brain (described as a ratio to creatine, institutional units, or millimolar concentration).

Brain metabolites
Different metabolites can be detected with MR spectroscopy and their biological roles can be used to provide pathophysiological insight for diagnosis and treatment monitoring.

The major metabolites include N-acetyl aspartate (NAA) which can be used to monitor neuronal health; choline (Cho), which indicates membrane turnover and can be used to assess tissue damage due to brain injury or cancer; measures of total creatine (Cr), which can be used as an energy marker although in most cases serves as an internal reference; myo-inositol (mI) is an osmolyte and astrocytic marker. More recently, MR spectroscopy has been shown to measure 2-hydroxyglutarate (2HG), an oncometabolite – a highly specific marker of cancer.

Glutamate (Glu, which is often indistinguishable from glutamine, they are frequently quantified jointly as Glx) is an excitatory neurotransmitter that is often modulated by disease and treatment; lactate (Lac), a marker of hypoxia; and glutathione (GSH), an anti-oxidant whose levels may reflect neuro-inflammation can be also measured but require specialized post-processing tools.

Clinical utilization
Different neurological disorders affect different brain metabolites differently. Every metabolite has a "normal" concentration that generates a pattern of peaks that is the same from person to person unless there is an underlying pathology. Diagnosis with MR spectroscopy can therefore be made by either comparing the numeric values of metabolite concentrations or by recognizing abnormal patterns of peaks in the spectra, such as in ECG interpretations.

Neurological diseases affect as many as one billion people worldwide and are a major cause of disability and human suffering. Diagnosis is often complex and the time window for effective therapy may be limited.

MR imaging, with its excellent soft-tissue contrast, is commonly the modality of choice for the detection of brain lesions. The morphological details and the sensitivity to changes in content and physical properties of water are exquisite. However, conventional MR is not able to detect changes in cell density, cell type, or biochemical composition, all of which can be investigated by MR spectroscopy.

The ability to make an early, noninvasive diagnosis or to increase confidence in a suspected diagnosis is highly valued by patients and clinicians alike. As a result, an increasing number of imaging centers are incorporating MR spectroscopy into their clinical protocols for brain examinations in selected patients. Over 60,000 papers have been published that utilize MR spectroscopy in human studies, of which studies in the brain are over 20,000.

The noninvasive and quantitative nature of MR spectroscopy renders it an excellent endpoint for drug clinical trials. In longitudinal studies, the exams can be repeated often with no consequence to the patient or the clinical target, unlike biopsy or other invasive measures.

As a direct or surrogate biomarker, MR spectroscopy provides greater sensitivity when measuring the effects of medications that can be readily compared and correlated to other clinical measures. Four hundred eighty-eight registered studies were found on ClinicalTrials.gov that utilize MR spectroscopy as part of the study description or intervention.

MR spectroscopy is available across every major MR scanner vendor including GE Healthcare, Siemens Healthineers, Philips, Canon (formerly Toshiba), and Hitachi. While hard numbers are not available, an examination of the MR systems at BWH shows that 90 percent of them have MR spectroscopy capability. Similarly, nearly every major academic medical center has research staff involved in MR spectroscopy.

Challenges and Solutions
Despite thousands of publications demonstrating the accuracy and diagnostic value of MR spectroscopy, this promising technique has not been fully utilized in clinical practice due to two primary issues: 1) data acquisition challenges, 2) lack of integration of data analysis into the clinical pipeline.

Unlike MR imaging sequences where the whole brain is acquired, MR spectroscopy is like a virtual biopsy where a region of interest must be selected. This raises some challenges to technologists, though advances in technology (such as improvements to automated shimming algorithms) have largely eliminated the need for time-consuming manual adjustments.
The development of more advanced MR spectroscopy sequences, such as chemical shift imaging, also allows for greater spatial resolution and allows for post-hoc reconstruction of data from select regions, albeit with some sacrifice of signal to noise.

On the one hand, research tools perform advanced processing methods and deliver high-quality quantification of metabolites (i.e., LCModel, jMRUI, AQSES, Tarquin). However these systems require expert knowledge to set up and operate, and are not well integrated into the clinical pipeline, or lack FDA approval (i.e., SIVIC). Advances in manufacturer software are underway, however. Third party software packages are seeking to fill this void (i.e. BrainSpec). These recent technological advances will help to translate MR spectroscopy into clinical, taking the technology of the future, into our present-day clinics. 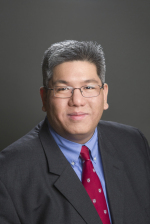 Dr. Alexander Lin
About the author: Dr. Alexander Lin is the director of the Center for Clinical Spectroscopy at Brigham and Women’s Hospital and assistant professor of Radiology at Harvard Medical School. He received his doctoral degree in biophysics and molecular biochemistry at the California Institute of Technology and research fellowship at the National Institutes of Health. He has been developing research in the field of MR spectroscopy since 1997.