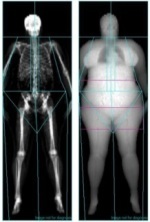 The need for higher X-ray radiation doses
in obese patients raises their risk of cancer,
according to a new study

by John R. Fischer, Senior Reporter
Patients who are extremely obese are in need of higher doses of radiation during X-ray exams, putting them at greater risk of developing cancer.

That’s the claim made in a new study by researchers at the University of Exeter and Musgrove Park Hospital in Taunton, U.K., who are calling for greater research on how to determine proper dose rates for patients who are overweight and obese.

“Our findings highlight the implications of increased radiation doses in severely obese patients,” Karen Knapp, associate professor of musculoskeletal imaging at the University of Exeter, who oversaw the study, said in a statement. “Although the risk of cancer from X-ray is very low, we urgently need more research in patients who are overweight and obese, so we can understand how to minimize doses in this group and feed into far more robust guidelines around radiation, in turn to minimize that risk.”

More than 22 million X-ray procedures were carried out from 2015-2016 in England, with up to 280 cancers possibly linked to X-ray-related radiation dose. Obese patients require higher doses of radiation due to the increased amount of tissue that needs to be imaged. The higher the dose, however, the more likely cell damage will occur.

Researchers evaluated 630 obese patients who underwent X-ray exams between 2007 and 2015. Each had a body mass index of up to 50, an indication of severe obesity and nearly the twice the appropriate weight for a patient based on his or her height. All had undergone procedures such as the fitting of gastric bands, gastric sleeves or gastric bypasses at Musgrove.

The team found the overall risk of cancer, at 153 percent, to be more than double that of people with normal weights who underwent X-ray scans, due to the extra radiation exposure. Risk of cancer from X-rays, however, was found to be low.

“Patients should not be put off from having the X-rays they need to investigate disease, as they are often crucial in getting the right treatment. With two thirds of the U.K. population overweight or obese, the results highlight how important it is for the NHS to implement strategies to treat this epidemic.”

The findings were published in the Journal of Radiological Protection.