The Marina room is one of many themes
offered by GE's Adventure Series, which
transforms scanner rooms into other
worlds for patients to gaze at and
imagine exploring during imaging exams.

by John R. Fischer, Senior Reporter
A 16-year-old boy walked down the hall of the newly opened UCSF Benioff Children’s Hospital for what he thought would be another nerve-wracking MR scan to monitor an ongoing medical condition. But his fears vanished instantly as he entered the MR suite and came face-to-face with a “boat”, surrounded by “scuba tanks” and a backdrop that looked like the San Francisco’s Fisherman’s Wharf.

As the MR technologist instructed him to hop aboard, the teen was comforted by the make-believe and was able to undergo the scan with greater ease – and for the first time ever, without anesthesia.

“It was a profound experience for me because here was a kid who’s been struggling through his MRs,” Dr. John MacKenzie, associate professor of radiology and chief of pediatric radiology at UCSF Benioff, told HCB News. “Any time that you’re not spending trying to convince a kid to hop onto an MR table and cooperate, the quicker a scan can go. We’ve spent a lot of time building these patient experiences and it worked, right out of the gate. I’ll always remember that moment.”

The boat, in reality, was the MR scanner, surrounded by a painted picture of the San Francisco Wharf area and oxygen and anesthesia tanks designed to look like scuba gear. All are elements of the marina theme, one of many designs offered by GE Healthcare’s Adventure Series, which transforms MR rooms into environments in which imaging is less scary and more inviting.

Like Benioff, many providers have sought out a range of new technologies to mitigate fears of imaging and the challenges they create. Doing so, however, requires an understanding of where the fear arises from and what resources, in and outside of technology, are required to help children cooperate to produce high-quality images for accurate diagnoses.

The Fear Factor
Undergoing an imaging exam is relatively harmless, with the most painful part being an injection, if required.

For adults, a task like this is easy. But for a child, it is unknown territory and can be a reminder of previous, painful experiences. “A lot of kids have been primed to be fearful of doctors because of immunizations and blood draws,” said Dr. Nadja Kadom, director of pediatric Neuroradiology at Children’s Healthcare of Atlanta. “When you think of MR imaging, it’s not only the machine that’s scary but the enclosed space. It’s the head coil for neuro imaging. It’s a table you’re strapped on to, feeling helpless. It’s the noise. It can be a very traumatic experience.”

Many children often are unsure of how to process and communicate fear, causing them to feel anxious during procedures and not cooperate with the technologist. This is commonly expressed in their inability to remain still during exams, a crucial component in producing quality images for accurate diagnoses.

Though services such as anesthesia are available to calm and relax the child, its use can often be a hindrance in conducting procedures.

“For cardiovascular disease pediatric cases, a lot of times in the past we’ve had to use anesthesia to relax or sedate them,” said Dr. Kanae Mukai, medical director of noninvasive cardiovascular imaging at Salinas Valley Memorial Hospital System and Ryan Ranch Center for Advanced Diagnostic Imaging. “That’s commonly a challenge because compared to imaging other parts of the body such as the brain or musculoskeletal region, the heart is a constantly moving organ and needs to be timed almost meticulously. The patient needs to be absolutely focused and not distracted.”

“The challenge of sedation extends well beyond the risk. It is a lot harder to get access to MR because you have to be at a facility where people are skilled in pediatric sedation,” said Dr. Shreyas Vasanawala, professor of radiology and director of MRI at Stanford University. “Even at those places, the availability of that expertise is limited. It tends to drag out when you can get that, and it drives up cost.”

Another area of fear lies with the noises made by the machine. The presence of an audio system in the form of headphones can act as a soothing distraction, making patients feel more at ease by providing music for them to listen to and a way to interact with the doctor and technologist.

“MR sound can hit up to 110 decibels, so you have to provide hearing protection anyway,” said Spencer Howe, CEO of MRIaudio. “The other important thing to remember is communication, so that the patient does not feel isolated.” 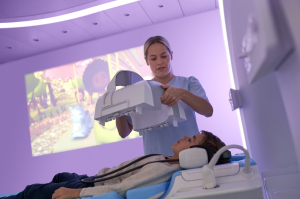 Philips' Ambient Experience in-bore Connect
immerses patients in a video experience.
What are your options
In addition to the marina room, Benioff also possesses rooms modeled after California’s redwood forest, the San Francisco Golden Gate Bridge, its cable car system, and the Bay Area. The aim is to distract the child from the fear they feel toward the procedure.

This, however, is just one of many innovations available for quelling patient fears. For instance, at Arkansas Children’s Northwest, children undergoing MR procedures are fully immersed in other worlds with the use of the hospital’s Philips Ambient Experience In-bore Connect.

“It allows patients to choose their own movies or take part in interactive experiences, like swimming with the dolphins or exploring space,” said Micah Kight, radiology imaging manager at Arkansas Children’s Northwest. “It used to be that you would just lie on the table without any distractions. No audio, no video – just the noise of the machine. Now, it has transformed into a fully interactive in-bore experience.”

The use of visuals has become commonplace in imaging environments, with TV screens fitted within the MR scanner and specialized goggles handed out to watch movies or TV series during exams. Some even consider such technology and immersive experiences to be a stepping stone in the development of virtual and augmented reality tools.

The cost of this equipment, though, can be dear, and out of the price range of many providers. Howe’s own company is currently trying to address this problem with the development of an affordable video display called MRIview that provides movies or TV shows for patients to watch during scans, and at the same time, is equipped with a camera to allow staff to monitor the patient to ensure they are safe, comfortable, positioned correctly and not moving.

“Some video displays can cost upward of $40-$50,000, which is a lot of money for our target audience of clinical MR centers,” he said. “We’re trying to design a video system that will be priced around $10,000. I would say about 80 percent of MRs in the U.S. have some form of audio entertainment, and I think video is becoming the next big thing. If you’re going to watch any type of entertainment, you need both audio and video.”

Christoffer Endresen, a regional sales manager in Norway, Sweden and Denmark for NordicNeuroLab, says that while pricey, such innovations can be worth it in the long-run for a hospital’s return on investment.

“For the hospitals that don’t focus on it, they should actually look at the real numbers that they have. Most are unaware of how much fear is costing them, especially when it comes to MR,” he said. “How many scans are aborted? How many require anesthesia and sedation? How much does it cost to perform the procedure and use more time? That sums up the whole price of fear.”

Echoing this sentiment is Paul Bullwinkel, president of Avotec, who says that shifts in value-based care have changed the game of reimbursements, and that fears of children can make all the difference in what a provider gets back financially.

“If you’re going to bill the insurance company, but fail to actually complete the exam based on how much time you said it would be, the insurer will pay you based on that specific time period you put down,” he said. “In other words, if you said it would take an hour, they will pay you for an hour, even if it took two hours to complete. This is a new incentive for trying to be productive. This really hurts the bottom line.”

He adds, however, that the desire to provide comfort should not interfere with safety. “You want to be careful you don’t create issues with patient safety or interfere with the imagingprocess. For a consumer, that’s a point to keep in mind when looking to purchase equipment.”

For providers seeking to calm pediatric patients during procedures, a medley of options are available, from mock scanners and proxies to lightweight coil technology to video and audio systems. But technology alone does not make all the difference in imaging children. The right skills, expertise and understanding by staff members must also be present. 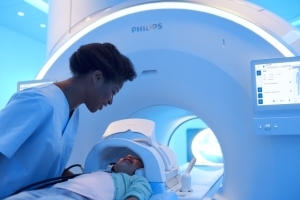 Philips' MR Ingenia Elition 3.0T scanner with Ambient
Experience and the in-bore Solution
helps reduce scan interruptions.
Where the fight against fear is headed
Prepping children for any exam requires more than just the right technology. It mandates a need to relay as much information to them as possible on a level they can comprehend. To do this, teams of child specialists are dispatched to consult and interact with the child, as well as their family, to speak to them in terms they can understand about what to expect, so that procedures can be performed as seamlessly as possible.

“We have kids drink oral contrast,” said Dr. John MacKenzie. “A child specialist may approach it like ‘We need you to drink this so we can see inside you. When you drink it, tell me what you taste,’ rather than ‘This stuff doesn’t taste good, but I need you to drink it.’ It frames the situation differently. Little things like that go a long way.”

But radiologists, technologists and staff have a duty to prepare the child, a task that is very different from prepping an adult for imaging. “The biggest component is to have the mindset, when you are working with children, that the child is in control, not you,” said Dr. Shreyas Vasanawala. “It doesn’t run quite on the same clock that an adult operation would. You have to be more patient. You have to book more time to just work with the child.”

At Stanford, Vasanawala relies on GE’s Air Technology, a “blanket-like” suite of lightweight and flexible radiofrequency (RF) coils that enables greater freedom in coil positioning and handling during MR scans, for procedures such as brain or body scans where the patient is traditionally covered in a heavy coil that can create discomfort or deter them from going through with the exam.

He says the solution helps calm children to the point where they don’t even need to be sedated and is likely to evolve even more.

“I think additional steps in coil technology can go a long way, such as having no cable – to use completely wireless coils that make the hardware less intrusive. Something that looks like a piece of cloth. Something that you can wear and wouldn’t even know is a piece of imaging equipment. In addition, anxiety around noise is pretty substantial. Right now there are tools for silent scanning but not completely silent exams. There is a direction to make a comprehensive silent scan silent in totality.”

Visual technology is also expected to evolve, with many anticipating the eventual development and introduction of virtual and augmented technologies.

“Having that technology will ease anxiety by transporting the patients to a variety of locations, whether it be via games, music, or movies,” said Kight.

While fear may always exist among children during imaging exams, efforts continue to expand the number of technological options available for soothing and eliminating such emotions, for the production of high-quality images to aid in making accurate diagnoses for the correct course of treatment.