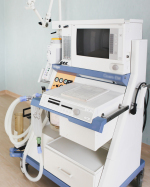 California will loan 500 ventilators to the federal government for distribution to states and cities facing a surge in COVID-19 patients.

by John R. Fischer, Senior Reporter
California will loan 500 ventilators to the federal government’s national stockpile for distribution to states and hospitals overwhelmed with high numbers of COVID-19 cases.

California is not the only state sending ventilators to the stockpile. Following a decrease in the rate of infections and deaths in Washington state, Governor Jay Inslee has pledged to return over 400 ventilators it received from the stockpile so that they can be delivered to states that require them.

President Trump also invoked the Defense Production Act to ensure medical suppliers in Texas and Colorado sell equipment to the federal government ahead of states, hospitals and foreign countries. A remnant of the Cold War era, the law enables federal officials to bypass competition and force contractors to supply them before completing orders for other customers, according to Kaiser Health News which notes that federal authorities have staked first rights to $137 million in medical supplies throughout the pandemic.

“It’s like ‘Lord of the Flies’ out there for states and hospitals as they bid against each other for critical medical supplies and equipment,” Sen. Chris Murphy (D-Conn.) told KHN. “Plus, there’s no transparency about what the federal government is doing with the equipment that they purchase when they outbid states and hospitals.”

The White House also used the law to force 3M in Minnesota to fill U.S. orders first after it previously said it wouldcontinue to provide respirators to Canadian and Latin American markets, despite the Trump administration demanding that it cease exportation and sell to U.S. consumers instead.

Newsom insists that the ventilators would be loaned but “not given” to the national stockpile.