by John R. Fischer, Senior Reporter
Certain types of cancer screenings dropped more than 90% in March — a consequence of the ongoing COVID-19 pandemic, according to software provider Epic.

Appointments for cervix, colon and breast cancer screenings dropped between 86% and 94%, compared to average volumes three years prior to the confirmation of the first COVID-19 case in the U.S. The decline is being attributed primarily to cancellations brought on by stay-at-home orders as well as recommendations to delay non-urgent outpatient care, and capacity limitations will impact screening volumes even after the pandemic ends, STAT reported.

"I anticipate that cancer screenings such as mammograms, pap smears, and colonoscopies will increase as people are able to get in to the clinic to get them done," Jackie Gerhart, a physician on Epic’s Clinical Informatics Team, told HCB News. "This will depend on the capacity for clinics to do these tests. Screening tests, by definition, are done when the patient is asymptomatic. A delay of 4 weeks may not be significant, but a delay of 4 months might be."

Cancellations of cancer screenings rose even before Mid-March when stay-at-home orders were issued in various states and counties, according to Epic’s data. The company evaluated the records of 2.7 million U.S. patients from 190 hospitals in 23 states. 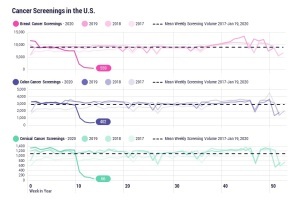 Drops in screening were chalked up to stay-at-home orders and recommendations to delay non-urgent outpatient care.

The drop during the pandemic period was higher than expected under normal variation, with breast and cervical cancer screenings falling by 94% compared to averages between 2017 and 2019. Colon cancer exams dropped by 86%.

A similar study by Komodo Health — which assessed records for 320 million U.S. patients — found cervical cancer screenings dropped by as much as 68% between March 19 and April 20, compared to the previous 11 weeks and a comparable period last year. Declines in testing for cholesterol, diabetes, and active or recurrent cancer were also observed, especially in COVID-19 hot spots like New York and Massachusetts.

In addition to stay-at-home orders, declines in screenings have been influenced by how doctors' offices and diagnostic centers have responded to the pandemic, with some choosing to shut down completely and others staying open for emergencies or maintaining a skeleton crew of staff. A small fraction of screenings continued in recent weeks, which could possibly be for people who are especially worried about their risk of cancer.

Dvorak, who says the drop in screenings “shocked” him, hopes that the research will help Epic customers once they return to work develop plans for booking those who may have delayed cancer screenings, with one tactic being to prioritize calls for people at high risk, based on past irregular screenings or a family history.

Epic aims to partner with its customers to research health outcomes associated with the data. It will also mine the data to see if it validates observations by its customers, including reports that brain surgeries have declined or that more emergency amputations have been performed on diabetics.

"Both Epic and the Epic customers that contribute their data will be doing research on the data to help advance medical knowledge," said Gerhart.

The findings were published in the Epic Health Research Network.