by Sean Ruck, Contributing Editor
Hospital Spotlight debuted nearly a decade ago and has been in every issue since — until now. Hospitals are understandably focusing all efforts on battling the pandemic and keeping staff safe. Since the pandemic was preventing a regular spotlight, it seems only appropriate that our non-hospital Hospital Spotlight is focusing on a group that has created a tool to help patients survive the illness. The team at Rice is sharing design plans for DIY ventilators free online for healthcare professionals to use if they find their facilities critically short of ventilators. HealthCare Business News spoke with Amy Kavalewitz, executive director of the Oshman Engineering Design Kitchen and Danny Blacker, engineering design supervisor of the Oshman Engineering Design Kitchen at Rice University, to learn more.

HCB News: I read this was designed as a senior project last year. When did that project actually start?
Amy Kavalewitz: The project began at the start of that school year, which was August 2018. It ran two semesters and ended at the end of the school year in May of 2019. The project got to the point of what their academics required, then the students graduated. With the onset of coronavirus, people saw the videos associated with the project and started reaching out to us. 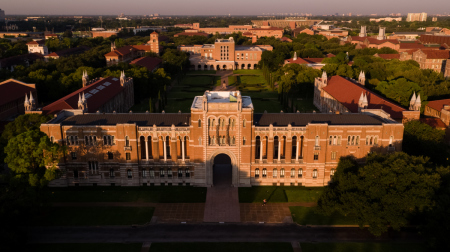 Rice University
HCB News: With the timeline, as you said, starting in August of 2018, that was obviously long before COVID-19 existed. So what was the impetus for pursuing the project at the start?
AK: Basically, our concept for our engineering design courses is to bring real-world projects for our students to work on. At the beginning of each school year or semester, we have people from the industry, medical centers, from independent organizations, come and pitch projects to the students that they want them to work on. The students choose from those options. When Dr. Rohith Malya had this idea for this automated bag valve mask, he pitched the idea to the students and they chose it and worked on it for two semesters with him.

HCB News: Where you find yourself today with the project is partly the result of a YouTube video getting posted?
AK: Yes, so a few of our projects each year are covered by our public affairs department and they’ll do a little video. It’s usually five to 10 of our 100+ projects we do in the Design Kitchen. So the videos get posted and it’s nice to share with people the kind of work we’re doing. But I guess when COVID hit and people started researching these types of ventilators and projects like this, that video kept coming up. All of a sudden we started getting all these requests. That was probably about three weeks into March. Our students were told to start staying home around March 16, and I think it was two days later that we started getting so many requests that we formed a new team.

HCB News: It sounds like YouTube algorithms put the project in front of people who really needed to see it?
AK: Yes, or Google. I think it really sparked when we got some inquiries from the Navy and Department of Defense. They ran across the project and reached out. There was some mechanism to possibly get funding to continue working on the project. We were initially being requested to turn over the plans for the original project, but we realized it was in a state where we didn’t feel comfortable with it being out there. That was, in part, because with the DoD and Navy, they wanted it to be out there as a DIY project, so we wanted to get it redesigned to do it safely.

HCB News: How many students were involved in the first iteration of it and how many people are involved today to bring it up to medical grade?
AK: Initially there were six students. They were seniors studying in bioengineering and mechanical engineering. When we decided to redesign it, there were limitations about who could be on campus, so we initially were going to do it staff and faculty, but were given permission to have a whiz-kid computational engineering student to come and help us with the coding. So in total, we have six to seven people on the team. 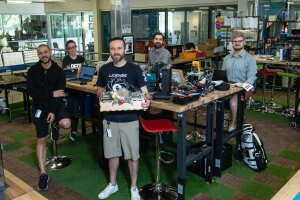 Members of the Rice University team developing the ApolloBVM bag valve mask automation device, from left: Rice staffer Fernando Cruz, project director Amy Kavalewitz, project engineer Danny Blacker, associate teaching professor Matthew Wettergreen, and senior Thomas Herring.
(Credit: Jeff Fitlow/Rice University)
HCB News: Are the initial six students aware of what their senior project has become?
AK: They are aware. I think they know their project has changed quite a bit, with the current design having little in common with the original. But we definitely got the inspiration from the students and wanted to give them credit for their work that helped us to move forward.

HCB News: By offering the plans for free online, does that help avoid having to get FDA approval?
AK: That’s a tricky question and we’re trying to navigate it now. It seems like the FDA has come out with an overarching guideline or policy that says things can be made under the emergency usage authorizations. But we’ve been unable to move quickly to get this tested on patients because of the concerns, because no one has really navigated this before.

We want people to be able to do this safely, we want people able to put them out through FDA approval, but that’s in the U.S. There are other countries where the process might be different.

HCB News: Regarding other countries, that’s the beauty of offering the plans for free online. Have you gotten any news of your plans being used internationally?
AK: We definitely have people reaching out, telling us they’re in different countries and making them, but we aren’t aware of any being tested on patients yet. One of our main things to do is to get plans out there. If manufacturers want to pick them up and mass produce, that’s fine too, but I would think that requires FDA approval. 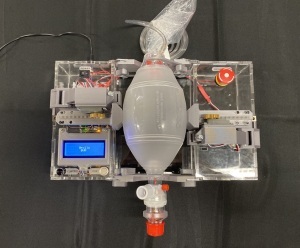 Rice University has released open-source plans for ApolloBVM, a bag valve mask automation device meant for emergency use when patients, including those with COVID-19, need assistance to breathe.
(Credit: Jeff Fitlow/Rice University)
Although we did put it out as open source, we did ask people to register. It’s free registration open to anyone and instant access. We did that so if we make improvements or find a safety issue, we can update people. In doing so, we’ve also been able to keep a little bit of statistics. From that, we’ve learned that more than 2,000 people have registered and accessed our site from more than 100 countries. Sure, some of those people are just curious, but some are actually making them. We’ve received so many emails that we’ve been getting help in responding to them. It’s a mix of warming your heart as so many people step up to help, but it’s also upsetting as you realize how many people are panicked because they might not have the supplies they need. 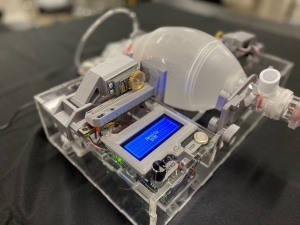 BVM acrylic version
HCB News: Have there been any big endorsements, for lack of a better word, from organizations or companies interested in your emergency ventilator design?
AK: I can’t name everyone right now, but I can say Rice University is really lucky because we’re literally across the street from the biggest medical center in the world. So we have definitely gotten a lot of interest from physicians and hospital administrators. We are working very closely with one that we hope to be able to talk about soon. Also, a lot of people are coming from the supply chain offering to help. They’re contacting us to tell us, saying, “we can get electronics for you, we can get motors for you, we can get different parts, can we help you make the cases?” It’s awesome. We think we have our game plan, but we’ll definitely utilize those resources if needed.

Danny Blacker
HCB News: I read that the price tag is less than $300 for the parts and materials to make this device. What other initial investments are needed for its creation?
Danny Blacker: This assumes that you have some type of small prototyping device like a 3D printer. You can probably get away without a laser cutter — that’s what we used to make the box itself, but you can probably get away without it. The 3D printer is important, but everything else is stuff you can get from off the shelf.
AK: These are made using remote control car motors.

HCB News: Like servos?
AK: Exactly. And little gears and parts like that.
DB: What it started with — we wanted to take apart a 3D printer and reconfigure it in a way that it could make this. But the motors just don’t have the torque needed, and they’re also extremely power hungry. So we made a switch midstream and it worked out for the best.
AK: We’ve done a lot of tests with the motors because the originals were heating up. We’ve now had one running for over 91 hours and it’s staying steady. 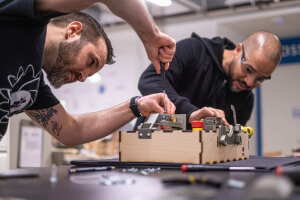 Danny Blacker, left, and Fernando Cruz, staffers at Rice University's Oshman Engineering Design Kitchen, assemble a prototype of the ApolloBVM bag valve mask automation device.
(Credit: Jeff Fitlow/Rice University)
HCB News: In an ideal situation where you have a reasonable 3-D printer, maybe the laser cutter, how long would it take to build a device for someone who knows what they’re doing?
DB: If you have one printer, it would probably take a day or two to print all the parts, but in the meantime, you could be constructing other pieces and getting your other parts completed. You can probably have it built in three days. If you have all the parts, you can probably build it in a day.

HCB News: Where did the name ApolloBVM come from?
AK: I think the students started calling it the Apollo project. But there’s a connection with Rice and President Kennedy doing the speech here about sending astronauts to the moon.