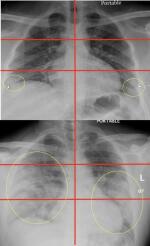 Chest X-rays may help determine which COVID-19 patients have the most severe cases and require hospitalization or intubation.

by John R. Fischer, Senior Reporter
Young and middle-aged adults with COVID-19 may benefit from a chest X-ray when taken to the emergency room, says a new study conducted at Mount Sinai Health System.

Researchers at the New York-based practice found that a chest X-ray can help identify faster which patients require hospitalization and intubation based on the severity of coronavirus patterns in their lungs. They assert that the approach could enable quicker triage and treatment of high-risk patients.

"This is the first study looking at how we can use chest X-rays from the emergency room to predict how sick COVID-19 patients will get,” first author Dr. Danielle Toussie, a resident in the department of radiology at the Icahn School of Medicine at Mount Sinai, said in a statement. “We demonstrate how valuable X-rays can be during this pandemic because, by evaluating disease in different portions of the lungs, we can predict outcomes, which can potentially help appropriately allocate resources and expedite treatment in the most severe cases.”

The team involved in the study devised a unique scoring system from zero to six to measure the severity of the disease on the lungs and used it to assess records of 338 COVID-19 patients who were seen between March 10 and March 26. Subjects were between 21 and 50, and each underwent an X-ray in the ER at The Mount Sinai Hospital, Mount Sinai Queens or Mount Sinai Brooklyn.

Investigators searched for opacities and their locations on each scan, having previously found patients with opacities to fare worse than those with disease in the lower lobes only. The X-rays were divided into zones of upper right, upper left, middle right, middle left, lower right and lower left, with a patient’s total score depending on how many zones the disease showed up in. Lower severity ranged from zero to two, and higher severity from three to six.

In contrast to prior reports, no significant differences were found based on race and ethnicity when adjusting for other factors such as age, gender, comorbid medical conditions and weight. Those at Mount Sinai Queens, however, were more likely to have more severe forms of the disease and require intubation than Manhattan or Brooklyn patients.

"These findings underscore how COVID-19, despite its many manifestations, is largely a respiratory illness and the lung changes identifiable on X-ray are a primary predictor of disease progression," said senior author Dr. Adam Bernheim, assistant professor of diagnostic, molecular and interventional radiology at the Icahn School of Medicine at Mount Sinai, in a statement. "This work is foundational for demonstrating the role of radiology not only in diagnosis, but also in predicting, triaging, and risk-stratifying COVID-19 patients so that those at highest risk for severe disease can be immediately identified from the moment of the very first chest X-ray upon presentation."

The BioMedical Engineering and Imaging Institute at Mount Sinai also contributed to the research.