An Rx for laughter

by Sean Ruck, Contributing Editor
We’re all familiar with the old adage, “laughter is the best medicine,” and there is enough scientific evidence to it that Banner University Medical Center’s director of behavioral health case management, David Jacobson, uses humor in his daily interactions with patients and staff.

Jacobson is the author of the 2018 book, “7 ½ Habits to Help You Become More Humorous, Happier & Healthier.” His book and his work in healthcare are firmly rooted in personal experience. Forty years ago, Jacobson was diagnosed with a severe form of psoriatic arthritis. “I was in pretty serious condition with rheumatic fever, which caused some damage to my heart and heart valve. I was 22, an athlete and overseas in Israel. I came back to the States in a wheelchair, 25 pounds lighter with a skeletal version of my former Olympian body. I was in extreme pain and I moved back in with my Mom.”

His mother doted, wanting to do everything for him, meanwhile he was trying to regain his independence. He was learning to walk again and pushing himself. The moment that changed everything was a phone call. Who was calling and why isn’t important, it’s just that the phone rang. “She said she’d get it, but I dragged myself, drooling and doubled like the Hunchback of Notre Dame, to the phone,” he recalls. “She was so busy laughing, I beat her to it. I was also cracking up and I realized, I have to live in this painful body, but there’s no rule saying I still can’t have quality of life and experience joy. From that moment forward, I decided to use my sense of humor and laugh as much as I can because it was going to help me get better.”

Jacobson started his healthcare career as a medical social worker at Banner, worked in trauma for many years before moving into administration, becoming manager of the social work department and then chief of social work for the VA in Phoenix and Texas before coming back to Banner as director. 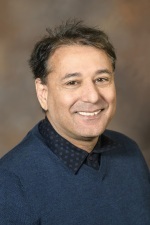 David Jacobson
In addition to his personal experience, Jacobson says there’s been a growing body of research, especially over the past 20 years, much of it originally done by friend and colleague Dr. Lee Berk at Loma Linda University, which points to humor as a beneficial treatment. “Dr. Berk is what you might call one of the grandfathers of researchers into therapeutic humor, doing a lot of hard science — measuring people’s tear ducts and saliva for Immunoglobulin A and certain substances that have health-boosting properties in the human body that are the result of laughter and the result of using your sense of humor for coping,” Jacobson says.

Jacobson also referenced the Association for Applied and Therapeutic Humor, which consists of range of professionals holding the common interest of applying therapeutic humor to patient care as a resource. In addition, he’s part of a humor academy where a three-year graduate program in humor studies is offered. “We’re talking about humor, but it’s actually a serious subject,” he says. “The health benefits are evidence-based. People who laugh hardily on a regular basis have lower standing blood pressure, reductions in pain and more.”
Jacobson says humor enhances his leadership skills as well. Staff members are comfortable bantering and joking, but they keep to guidelines of appropriate humor — meaning nothing racist, sexist or ageist. “There’s a lot that can be divisive, but appropriate humor is great. I’ve always fallen back on self-effacing humor, poking fun at myself and my staff does the same thing now. This has led to them not being afraid to make mistakes, knowing that if they share that with their sense of humor it’s going to help everyone learn and get better,” he says.

For patients, Jacobson says a little finesse is needed. “It’s not for everyone, but most patients can appreciate a good sense of humor. Those who do, I encourage it with them. I had one patient, a cardiology patient in his 30s, in for some time due to his heart condition. We started to banter — it was little things. One day, I walked in and saw he looked frightened. He told me he was having his surgery that day and wasn’t sure he was going to make it. I asked what I could do and he told me I could tell him he was going to make it. I couldn’t guarantee that, but I told him when he came out of surgery, I’d have a sign on the wall saying, “You are Here,” and then he’d know he made it. It’s a little thing, but he remembers waking up after surgery, seeing that sign, smiling and being oriented because of it. He said he’ll never forget that moment of feeling that everything was going to be okay, just because of a silly sign on the wall.“