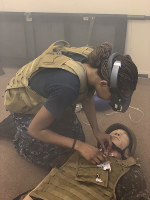 by John R. Fischer, Senior Reporter
As augmented reality telemonitoring becomes more common in operating rooms, in which doctors communicate and perform complex procedures under the guidance of experienced counterparts remotely, the technology may have unique value in the battlefield.