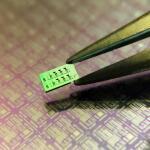 Researchers in Germany have designed what they claim is the world's smallest ultrasound detector, capable of performing super-resolution imaging by visualizing features much smaller than previously thought possible

by John R. Fischer, Senior Reporter
Researchers at Helmholtz Zentrum München and the Technical University of Munich have developed what they claim is the world’s smallest ultrasound detector.

At a size 100 times smaller than an average human hair, the silicon waveguide-etalon detector (SWED) enables super-resolution imaging by visualizing features much smaller than previously thought possible. And while primarily designed for optoacoustic applications, the detectors could be used in broader fields such as sensing and imaging.

"Optoaocustic imaging is an optical imaging method that is insensitive to photon scattering, enabling deep imaging inside tissues," SWED developer Rami Shnaiderman, a researcher at the Institute of Medical and Biological Imaging at Helmholtz Zentrum Munich and the chair of biological imaging at the Technical University of Munich, told HCB News. "This approach resolves the absorption of light on the basis of detection of ultrasound waves emitted from absorbers. The resolution of such images strongly depends on the size of the ultrasound detector employed."

Core detection technology for ultrasound usually consists of piezoelectric detectors, which convert the pressure from ultrasound waves into electric voltage. The smaller the piezoelectric detector is, the higher the image resolution. Reducing its size also enables smaller, densely packed, one- or two-dimensional arrays and an improved ability to distinguish features in the imaged tissue or material. Further reducing the size, however, impairs its sensitivity to the point where it is unusable for practical applications.

That’s why researchers at both organizations used silicon photonics technology instead to build detectors, with the technology able to confine light in dimensions smaller than optical wavelength. Instead of recording voltage from piezoelectric crystals, the SWED monitors changes in light intensity propagating through the miniaturized photonic circuits. It has already been widely exploited for development of miniaturized photonic circuits and is already widely used to miniaturize optical components and densely pack them on the small surface of a silicon chip.

Smaller than a human blood cell, the SWED is an on-chip that is about half a micron, which corresponds to an area that is at least 10,000 times smaller than the smallest piezoelectric detectors employed in clinical applications. It improves image resolution, enables new discoveries by observations of smaller pathological features, and is 200 times smaller than the ultrasound wavelength employed, meaning that it can visualize features that are smaller than one micrometer, leading to what is called super-resolution imaging.

The increase in imaging resolution could enable users to study ultra-fine details in tissues and materials, as well as the fundamental properties of ultrasonic waves and their interactions with matter on a scale not possible before.

In addition, the robustness and easy manufacturability of the silicon platform could allow for large numbers of detectors to be produced at a small fraction of the cost of piezoelectric detectors, enabling a number of different detection applications to be developed based on ultrasound waves.

"The small footprint of the silicon chip is very attractive for intravascular and endoscopic applications, and those practices are likely to benefit first from the SWED," said Shnaiderman. "For comparison, clinical ultrasound detectors like the intervascular ultrasound commercially available from Boston Scientific have an area of ~ 1 mm square. On the other hand the SWED on the silicon chip has an area of less than 1 µm square. With minor modifications the SWED can be added alongside such detectors (or replace them altogether) to enable high-resolution optoacoustic endoscopy alongside the endoscopic ultrasound. This would enable much more detailed ultrasound image of the tissue with complementary absorption contrast."

The researchers are primarily focused on producing applications in clinical diagnostics and basic biomedical research but do note that the detection technology could be used for industrial applications too.

"The commercialization of the technology interests us a lot, and of course we would like to see it become part of commercially available devices, including clinical ultrasound systems," said Shnaiderman. "To achieve this we are improving certain aspects of the detector platform such as the sensitivity, and refining the readout of dense SWED arrays on a single chip. In parallel, we are looking into which applications will benefit the most from our technology."