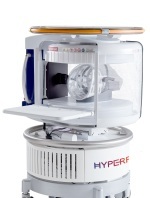 by John R. Fischer, Senior Reporter
Hyperfine Research racked up $90 million in an oversubscribed Series D financing round that will go toward the commercialization of its Swoop portable MR imaging platform.

Swoop boasts wheels that can transport it to a patient’s bedside, where it can be plugged in and controlled with an Apple iPad to image the internal structure of the head and produce scans in minutes.

“We refuse to accept barriers to accessible, equitable care, and we intend to make the previously impossible both possible and affordable by delivering MR imaging to the patient, wherever that patient is,” said Hyperfine founder Dr. Jonathan Rothberg in a statement.

The $90 million will help enhance U.S. commercialization efforts for the platform as well as support the company’s plans to launch it in multiple countries.

It will also be used to further progress new regulatory clearances, fast-track continued AI and deep learning developments for imaging accessibility, and help Hyperfine work with physicians to identify new use cases.

The Swoop portable MR platform scored FDA clearance in 2020 and is meant to be a complementary system to traditional, fixed MRs, which are inaccessible to patients who are difficult to transport to the MR suite. Coordinating transport often leads to four-to-six-hour backlogs, which hinders the use of MR, especially in time-sensitive settings like the ICU and ER.

The solution is also available at a fraction of the cost of traditional MR scanners and is currently being assessed in a global research program for its ability to to identify and potentially reduce labor- and delivery-related brain damage that causes HIE (hypoxic ischemic encephalopathy) in infants in low-resource countries. The program is supported by a $1.6 million grant from the Bill and Melinda Gates Foundation.