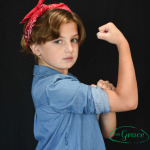 Photo of Grace Eline provided courtesy of the American Childhood Cancer Organization and WITH Grace Initiative.

by Lisa Chamoff, Contributing Reporter
Nearly three years ago, when Grace Eline was diagnosed with a germinoma, a brain tumor most commonly found in children and adolescents, the then nine-year-old didn’t have to travel far to receive precise treatment.

The trip to the Laurie Proton Therapy Center in New Brunswick, New Jersey, was just about 35 minutes door-to-door from the family’s home in suburban Gillette. The relatively easy commute and ability to recover from the two dozen rounds of radiation therapy with protons was easier in more familiar surroundings.

“If I was ever feeling really bad, it felt better to have the comfort of home,” said Grace, now 12, who was a guest at the 2019 State of the Union address.

Grace’s tumor was located in a fairly central part of her still-developing brain, which meant that any surgery would be too complex. After a few rounds of chemotherapy, her physicians determined that she was an ideal candidate for proton therapy, which delivers higher doses of radiation to the tumor via a more precise dose, with less damage to surrounding tissue.

Grace’s mom, Aubrey Reichard-Eline noted that many of the patients and their families needed to travel for treatment. Being in Northern New Jersey meant they had access to top-notch facilities.

“I tell people Grace got cancer in the best place you could have it,” Aubrey Reichard-Eline said.

Highly specialized
Access to proton therapy has been increasing, though many young patients still have a complex journey.

Two decades ago, there were only two proton centers in the U.S. — one in California, at Loma Linda University, and the Francis H. Burr Proton Therapy Center at Massachusetts General Hospital in Boston. Today, although there are 35, according to Dr. Andrew Chang, president of California Protons Cancer Therapy Center in San Diego, only a little more than a dozen of those have pediatric programs, which require a high degree of specialization.

Pediatric patients are the best candidates for this precise treatment, as their developing bodies are more sensitive to radiation and also have a greater risk of developing cancer as a result of radiation exposure up to 50 years down the line, he explained. Additionally, since younger children are referred more often than older children, 42 to 46% of the patients require anesthesia. There is also more complex integration of care for pediatric cancer treatments with half of the most commonly treated diagnoses requiring chemotherapy during radiation, often necessitating a daily ambulance transfer to and from the hospital.

“Just because one has a proton center doesn’t mean one should treat pediatric patients,” Chang said.

Coordinating care
Building up a pediatric proton therapy program also takes a lot of close work with centers around the globe.

Chang noted that before the National Health Service (NHS) opened the first proton beam therapy center in Manchester, England, in 2018, half the pediatric patients in the U.K. needing proton therapy traveled to him for treatment.

“In order to build up that smooth referral process, it takes a lot of coordination,” Chang said.

Dr. Torunn Yock, the director of pediatric radiation oncology at Massachusetts General Hospital, said that only 5 to 10% of the patient population comes from the hospital network, with most referrals coming from providers without access to a proton center, especially in New England and upstate New York. 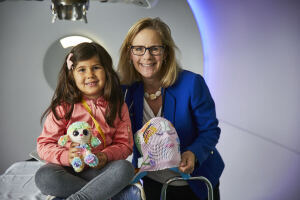 Dr. Torunn Yock, Massachusetts General Hospital, alongside a pediatric patient.
Yock said the outcomes of proton therapy are generally worth the effort for providers to refer patients for proton therapy and the team at Mass General has good communication practices in place.

“Many of our referrals come from pediatric oncologists and some come directly from radiation oncologists or surgeons,” Yock said. “Some doctors are reticent to refer their patients out for proton therapy, as it is an unknown if they have not previously worked with the care team at a proton center before.”

Yock suggests to the doctors who are reluctant to refer to identify a reputable center that treats a lot of pediatric patients, and then communicate with the team to ensure they can deliver high-quality care. The reduction in late side effects of treatment are very beneficial for a patient’s future quality of life and worth the investment of the referral and travel in most cases for the family.

“We try very hard to communicate with the home team to make them comfortable with the treatment we deliver,” Yock said. “After a patient has been referred to us for the first time, there are usually subsequent referrals, as the doctor then feels more comfortable entrusting the care of their patients to others.”

Tiffany Koolakian, administrator of the Department of Radiation Oncology at Massachusetts General Hospital, noted that in 2016 and 2017 they started a process improvement project to improve patient access. It resulted in appointing a proton access manager to oversee the referral and intake process, oversee proton rounds and make sure the patients’ and families’ needs are met, so those aspects of care are not put on the physician and their staff.

“Now that we have one person who’s really taken on that role, there’s that nice clean line of making sure the patients are connected to the resources that they need,” Koolakian said. 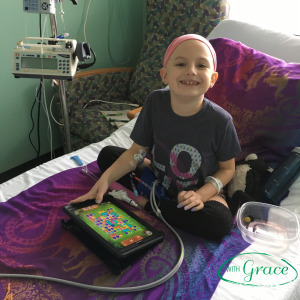 Grace Eline during her treatment.
COVID-19 complicating the financial burden
The financial burden of travel and securing housing has always been an issue, and it has been particularly challenging during the pandemic.

While cancer screening has been down over the past year, Yock of Mass General noted that this has softened patient numbers in the adult population, rather than in pediatrics. Travel and housing have become more complicated to coordinate.

Ronald McDonald House is often a resource for children receiving proton therapy, providing them with a free place to stay, meals and often shuttle service while they’re undergoing treatment. The Ronald McDonald House that serves Mass General uses an apartment model, instead of shared kitchen and bathroom facilities, however they are still governed by COVID-19 safety restrictions from the national organization, such as allowing only one parent and the child undergoing treatment to stay there, with no siblings or parents rotating and no going home on weekends. During the pandemic, the families of many of Mass General's young patients have elected to stay at apartment-style housing run by an organization called Christopher's Haven, which allows siblings to stay there and for parents to take turns if they need to, and lets families return home to nearby states, such as Connecticut and Rhode Island, on weekends, according to Yock.

Many organizations help increase access. The nonprofit Compass to Care provides financial assistance for patients who need to travel and covers housing for all kinds of cancer treatment, receiving donations, grants and hosting events to raise money.

“Our main goal is to ensure it’s not just people who have the financial means to get their children this treatment,” said Michelle Ernsdorff-May, Compass to Care’s founder.

Ernsdorff-May notes that some medical centers don’t have access to facilities like the Ronald McDonald House and need to create partnerships with nearby hotels to house patients for several weeks at a time.

The COVID-19 pandemic has made the organization’s work extra challenging, with plane travel more risky and some of the housing providers limiting capacity. The numbers of patients going into treatment dropped in April, May and June of 2020 and saw a large uptick in September, October and November.

“Medical centers we’ve never worked with are coming to us,” Ernsdorff-May said.

It can also be difficult for parents to take time off work to travel long distances for treatment.

“To try to find some equity by increasing access for those families is vital,” Ernsdorff-May said.

Looking ahead
In the long term, the construction of more proton centers will continue to improve access, though the health coverage landscape and less prevalent expertise in pediatric cancer complicates things for younger patients who will benefit the most.

Pediatric patients should be treated in centers that see a high volume and can optimize the care for the pediatric malignancies which are very different than adult cancers, said Yock of Mass General.

Yock notes that the situation is especially difficult for underinsured patients in states that don’t have proton centers, such as North Carolina or Nevada. Patients in those states have limited or no options for proton radiotherapy, depending on the state Medicaid rules. Notably, other private insurers are now dictating which proton centers children can go to, and this is usually based on cost and proximity, Yock said.