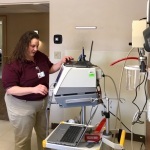 by John R. Fischer, Senior Reporter
Last year, Danielle McGeary saw nine training programs for biomedical engineering technicians (BMETs) close at universities across the U.S. This, she says, has become common due to lack of enrollment, with some programs only recruiting two or three people a year. “Academic institutions have to make revenue off their programs and if people aren’t enrolling in them, they aren’t going to stay,” McGeary, vice president of health technology management for AAMI, told HCB News.

As a result, a deficit of trained BMETs is creating challenges for clinical engineering departments at many hospitals. This has elicited concerns for the profession as over 60% of the workforce is beyond 50 and inching closer to retirement in the next 10-15 years. To prevent an even wider deficit, AAMI has teamed up with the U.S. Department of Labor to establish the national BMET apprenticeship program, designed to recruit entry level professionals into the roles of BMETs.

Ending the deficit
The national BMET apprenticeship program is the brainchild of biomed Margaret (“Maggie”) Berkey. For years, Berkey noticed a lack of individuals studying to become BMETs as well as a lack of “vital encounters” among those who were training for the profession. “The number one problem that we’ve been facing for longer than I’ve been in the field is that nobody knows about biomeds, healthcare technology management,” she said. “This is the best kept secret in the world.”

She presented her idea at the AAMI annual conference in 2019 before the HTM shark tank — an AAMI version of the popular TV show — and connected the association with the U.S. Department of Labor. Together, the two organizations came up with a structure for the apprenticeship and submitted it for regulatory approval, which it obtained in March of this year.

Under the program, trainees will receive 4,000 to 6,000 hours of paid, on-the-job training in safety, electronics, anatomy, and information technology. BMET employers interested in participating can enroll with AAMI and begin posting apprenticeship positions and hiring apprentices. Those interested in becoming an apprentice simply apply to the open positions posted and once hired, are trained on a curriculum developed by AAMI and vetted by over 100 HTM professionals. Overseeing them are senior BMETs who provide hands-on opportunities to get them ready for the real world upon completion of their apprenticeship.

The U.S. Department of Labor will audit the program to ensure it is running smoothly and has listed it in its national apprenticeship database. AAMI will jumpstart recruitment by connecting with high school guidance counselors across the country, especially those in STEM, Magnet and Charter schools. But McGeary says BMET employer participation is key. “If there are no participating employers, there will be no apprentices.”

In addition to hands-on experience, apprentices are required to achieve three forms of certification, including the Certified Biomedical Equipment Technician candidate status. The other two are a certification in IT fundamentals; and AAMI’s new CABT (Certified Associate of Biomedical Technology) certification. CBET certification can boost recognition of a BMET’s skills and be obtained by those who hold a two-year degree and two years work experience; or if they have no degree, four years of work experience. Those who lack the experience can still take the test and be placed in a candidate status. They officially become certified upon obtaining the years of hands-on experience they need.

The CABT is especially important for recruitment according to McGeary, as it is an entry level certification that can be obtained by those with only a high school diploma or a GED. “These emerging HTM professionals can obtain that certification and it’s good for five years. After five years, they’re now eligible to become a CBET.” She adds that AAMI has seen a “huge correlation” among professionals who become certified early in their career and those who are most likely to maintain their certification throughout it.

A mass exodus
The U.S. Bureau of Labor Statistics predicts nearly 3,000 new BMET positions will be available by 2029. To expand the number of BMETs, recruitment at the high school and college levels is essential, according to Ken Ottenberg, head of operations for HSS, which provides managed security and HTM services for healthcare organizations. "I think a lot of us who got into the industry fell into it by accident versus it being our primary focus. Most of us never knew about it when we looked at higher education. I think there's the opportunity to let people know HTM is out there. Knowing there is a viable, long-term career, and it offers flexibility and growth is great for our profession.”

Not all who enter the profession go through a two-year or four-year BMET program in school. Many come from IT or some type of electronics background and are trained by HTM departments and hospitals on their own. As a result, more experienced BMETs are concerned that entry-level ones do not possess the same hands-on training they received.

“I grew up building model planes, working on cars and bikes and computers. In high school, I took four years of science and shop class with wood, metal, machine tools, and electronics. These skills have served me incredibly well, along with the benefit of being mentored by the owner of a bike shop as a teenager, and the lead engineer of the medical electronics company that I got my first tech job with,” said Scot Mackeil, senior anesthesia biomedical technician at an academic medical center in Boston. “Every day my skill set was built and evolved because someone took an interest in making sure I was going to be good at my job that day and in the future.”

A future for HTM professionals
While the program is expected to help bridge the deficit of BMETs entering the field, HTM professionals, departments and college programs can take additional steps to address the issue. The first, according to Ottenberg, is getting the word out about what a BMET does and the role they play in hospitals and healthcare systems.

"We at HSS have done some really good things with our high schools and junior high, and through our partnership with CABMET (Colorado Association of Biomedical Equipment Technicians)," he said. "We have tried to embrace the belief that if we can bring the industry to people it will foster their curiosity."

Ottenberg believes its takes “an overall broad and rounded skill set” to be a competent BMET with assets such as a “good knowledge of anatomy, physiology; theory of operation, to understand different technology clinical aptitude, communication, the ability to know your limits and when to get help.” All, he says, are necessary to prevent equipment failure and address maintenance challenges.

McGeary says training also differs in larger healthcare systems of 30 or 40 HTM professionals compared to smaller, critical access hospitals where the HTM department is only one or two people. “How do we make sure those people are trained to a minimum standard. When it’s just one or two people taking care of all the equipment they don’t have as much time to be mentoring or training a new employee.”

Mackeil says another helpful idea is to help the BMET candidate through the onboarding process. “Many hospitals have massive bureaucracy. It may take days or weeks for HR to churn through what they do. I would assign a member of the department to be a mentor to the person coming onboard while they’re waiting to be accepted, someone should keep in touch with them and make sure everything is on track.”

Maggie Berkey says skills outside of the technical expertise of the BMET workload are also essential. “Customer interaction and service is a huge part of being a good biomed. Schools aren’t all set up to have customer encounters or make the soft skills part of the training, or grading based on soft skills. What you can and cannot grade on influences those soft skills.”