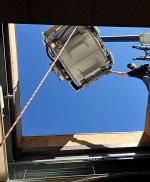 A Canon Vantage Orian MRI swings into place in a recent installation.

by John W. Mitchell, Senior Correspondent
As COVID-19 patients filled hospitals during the pandemic, it was a financial double whammy for imaging volumes as uninfected patients stayed away. As outpatient imaging revenue plummeted, hospitals had to refigure capital purchases to redirect money toward pandemic overhead. The result was fewer imaging equipment installations and deinstallations for much of 2020, but insiders see light at the end of the tunnel.

“I think all OEMs were affected,” Shawn Etheridge, MRI/CT product marketing for Hitachi Healthcare Americas told HCB News. “But things are looking up, and I think there’s going to be a bounce for the entire industry.”

For the jobs that did take place, project leaders had to help their crews adapt to evolving social distancing mandates and other precautions, which varied from city to city and state to state. Bob Iravani, president of Chicago Medical Exchange, recalled that the veracity of these standards ebbed and flowed with each new wave of the disease. But most of all, it was the impractical aspect of the safety protocols that took some getting used to for his team.

“Nurses and doctors are used to wearing masks, but our guys aren’t,” Iravani explained. “It’s hot, sweaty work moving imaging equipment around. We’ve had to work through a lot of safety rules that didn’t exist before Covid, but we adapted.”

The nature of rigging and moving jobs often means having six or seven crew members working in close quarters, which can make social distancing virtually impossible. For John Cereghino, vice president of JC Duggan, establishing a culture of accountability was as much a priority at the outset of the pandemic as ensuring access to PPE.

"We have been somewhat lucky that we haven't had an outbreak in our crew and that stems from our people doing the right thing while they aren't working," said Cereghino. "Our people know their families rely on them as well as we do, and we count on them to act responsibly when not at work."

The slowdown in orders has had a downstream impact on the secondary equipment market. With fewer new machines going in, there aren’t as many older units for hospitals and outpatient clinics that go that route to upgrading their even more outdated imaging equipment, according to Iravani. The pandemic also pinched the availability of the contractors and subs who do much of the site prep work.

“Everyone was having challenges getting projects started, with the domino effect of these problems,” said Iravani. “But business is picking up again.” 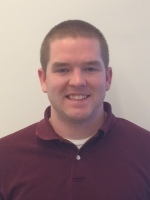 Adam Senne
The deinstallation and installation pipeline plays out on the world stage, and lockdowns of varying severities in different countries took their own toll on business activity, according to Adam Senne, national account executive, Simon Hegele Healthcare Solutions.

At the height of the epidemic, it could take up to three months to get a new piece of equipment loaded onto a boat for transport to the U.S. from Europe or Asia, said Shelby Lemler, executive vice president of operations, MXR Imaging. 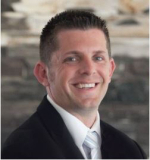 Shelby Lemler
“Covid has been a roller-coaster,” said Lemler. “I think we’ll continue to see some effects on the supply line through 2021. But hospitals are getting a handle on their budget outlooks, and I believe they will feel more comfortable moving forward this year."

In the U.S., slowdowns were most pronounced during the first few months of the shutdown and during the period where elective procedures ceased. “Since then, we have slowly been working our way back up to normal installation volumes and are hiring technicians again in multiple locations across the U.S.," reported Senne.

Large metro, urban hospitals especially felt the stress of the pandemic, according to Luai Tabbal, director, service technical operations at Canon Medical Systems USA Inc. Such sites were more likely to request a delay or postponement as they struggled with the onslaught of Covid patients. He also reported "less feet on the street", regarding installers to perform site work.

“Full PPE equipment is a tough situation for our crews to operate in,” he said. “Even more than usual, deinstallations and installations required careful planning; we had to double down on internal and external communications.”

Fortunately, deinstalling and installing medical imaging equipment was considered an essential function during the pandemic. Richard Hart, area service manager Western Region, Alpha Source Group, recalls flying into Chicago for a project. He was asked for an essential worker letter at the rental car counter. Fortunately, Hart had such a document from his CEO. Otherwise, he would have to self-quarantine in a hotel for 14 days. 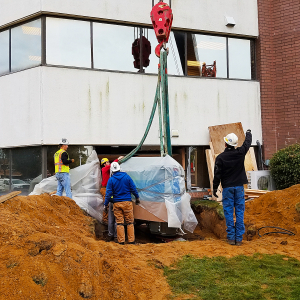 MXR Imaging postions a new imaging device through a foundation.
Planning your own logistical jobs
As much advance communication as possible — months rather than weeks — was identified as the vital element in preparation for any medical imaging deinstallation and installation. Iravani, with Chicago Medical Exchange, said that even with repeat clients, it's essential to approach every job like it's the first time. For example, he found that time windows for access to space in the last year were much tighter than in the past. Sometimes his crews had production schedules that were 25% shorter over fewer days.

Mostly it went smoothly, said Iravani, but on one job, the subcontractor left an egress space that was a foot too narrow on all four sides. His team had to reconfigure their work while the contractor corrected the problem. On another job, they were held up for 45 minutes because the imaging director was late arriving with security clearance badges necessary under pandemic protocols.

Etheridge, with Hitachi, said that his team often sees problems with access, especially in cases where a hospital has made additions around an existing imaging space. In planning new construction, no thought was given to the day when imaging equipment would need to be pulled out.

“Rig out paths have to be looked at for deinstalls and removals to make sure they are no challenges,” said Senne with Simon Hegele Healthcare Solutions. “Just because the system made it into the room/hospital does not mean it will make it out as well.”

A GE 1.5 LCC Magnet removed from an imaging center in San Antonio by Alpha Source Group. The magent was being transported to a buyer in Houston
Outdated, inadequate electric and cooling supplies to run new equipment can be another challenge. Another is insufficient staging area to move the old and new equipment on and off the property. This can be especially challenging in hospitals with a small campus footprint, such as in a city where real estate is at a premium.

Hart, with Alpha Source Group, recalls a debacle he got called in to solve. A large university hospital relied on its internal planning department to manage the installation of a nuclear medicine camera in a classroom. A new course was scheduled to begin to train much-needed technicians. 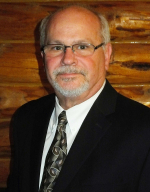 Richard Hart
“The imaging administrator realized three weeks before the go-live date — with students already signed up for the course — that electricians and HVAC crews had not even been lined up," Hart recalled. "It was a thousand-foot move from the loading dock across marble and carpeted floors, and no measurements had been taken for getting the machine to or into the classroom. The problem was that their internal planning department had never conducted an imaging equipment move. Lead time on installation projects is much different than anything they had worked on before.”

Hart was on a plane the next morning. Working with two trusted contractors, fully-loaded tool crates were shipped in and catered meals arranged to keep the crews on-site for the entire workday. They were able to get the nuclear medicine camera installed with enough lead time for the application team to meet the opening day of class. 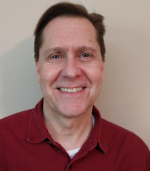 Shawn Etheridge
OEMs and third-parties
While it’s easy to think of them as separate, equipment manufacturers and third-party logistics teams often enjoy a symbiotic relationship. According to Senne, it's not unusual to see a spike in the number of OEM projects at the end of the fiscal year, as OEMs look to hit their project numbers for the year. For them, it sometimes makes more sense to keep technicians in the field fulfilling service contracts than performing installs. Plus, depending on geographic location, it may cost less for an OEM to hire a third party to handle an installation due to high travel costs.

“Our technicians are dedicated strictly to installs,” said Senne. “They stay on-site from the start until completion which, depending on the OEM, can be from delivery to ramp-up of the system. This allows for high-volume repetition, leading to shorter install times and significantly faster revenue recognition for the OEM.”

One helpful change over the last decade or so is that the imaging equipment is not as heavy as it used to be. 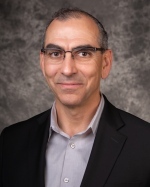 Luai Tabbal
“We’re looking at a footprint for the larger modalities of about 13,000 pounds now, compared to 30,000 pounds on the older equipment,” Lemler with MXR Imaging explained. “It’s easier to configure the footprint with lighter equipment. Also, with the right reinforcement and building design, newer CT and MR equipment can be placed on any floor (as opposed to only the ground floor).”

Whether it be a third-party or the manufacturer, an install (or deinstall) job can make or break a reputation. Tabbal with Canon stressed that planning and communication around the construction schedule are vital to a job going smoothly.

"Any construction delays cannot be made up by compressing the install timeline," he cautioned. “When timelines are not met, it definitely has an impact on the customer. They can’t scan patients and generate revenue to meet the projected revenue from the project.”

Consistency from project to project and client to client may offer an operational strategy. Tabbal has been working for over a year now on a feasibility/proof of concept solution to avoid installation delays. His team set up a process to manage the mechanical and electrical work on behalf of their clients. They are currently reviewing the data from the program to decide about going forward.