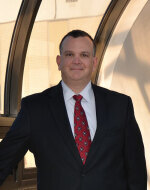 Willis-Knighton Health System announced today that James K. Elrod, President and Chief Executive Officer, plans to retire effective September 30, 2021. The Board of Directors has unanimously elected Jerry A. Fielder II (Jaf) to succeed Mr. Elrod as President and Chief Executive Officer. With a tenure of over 30 years, Mr. Fielder currently serves as a senior member of Willis-Knighton’s executive leadership team.

“On behalf of the Board of Trustees, the medical staff, the management team and Willis-Knighton’s over 7,000 employees, we want to thank Mr. Elrod for his unparalleled contributions and indelible impact during his more than five decades at the helm of this organization,” said Board Chairman Frank Hughes, M.D., “Under his leadership, Mr. Elrod has grown Willis-Knighton from a small community hospital to one of the largest healthcare systems in Louisiana. We are fortunate that he will be President Emeritus and remain on the Board of Trustees so as to ensure a seamless changing of the guard.”

With an unwavering vision toward the future, Mr. Elrod led the expansion of the original 60-bed hospital into a fully integrated care network consisting of four acute care hospitals and a rehabilitation institute, an extensive multispecialty physician network, and the state’s largest retirement community, The Oaks of Louisiana. Mr. Elrod created the characteristic that distinguished Willis-Knighton most, which is a commitment to innovation.

A few of the many “firsts’’ at Willis-Knighton during Mr. Elrod’s tenure include organ transplants, minimally invasive cardiac surgery, innovative eye surgery technology and hyperbaric oxygen therapy. Willis-Knighton also was the first in the state to offer proton therapy for cancer treatment. Mr. Elrod has been recognized by numerous organizations for his ongoing commitment and dedication to the community, which led a regional newspaper to name him one of the most influential people in North Louisiana in the last century.

Mr. Elrod earned a Bachelor’s Degree in Business Administration from Baylor University. Upon fulfilling his military commitment in the United States Air Force, he attended Washington University School of Medicine where he earned a Master’s Degree in Hospital Administration. Beginning his distinguished career at Willis-Knighton at the age of 27, he is the longest-tenured hospital administrator in the United States having served 56 years.

“Working with Jaf during the past 30 years of his career here, I have not just seen him grow and demonstrate his capabilities, I have seen his heart. His dedication to the health system, the medical staff, the employees and our community is unquestionable and, I believe, unshakable. He will have the support of a strong executive team, just as I have had, and they have a solid foundation on which to build” said Jim Elrod. “I look to this wisdom of John F. Kennedy who noted: “Change is the law of life. And those who look only to the past or present are certain to miss the future.”

Mr. Fielder’s selection comes after a robust, multiyear succession planning process led by the Board of Trustees. “After a thorough search and a slate of top candidates, the Board concluded that there was no one better qualified than our own Jaf Fielder,” stated Dr. Hughes. “During the interview process, it became clear that Jaf is unanimously viewed by physicians and staff alike as a trusted colleague and dedicated leader within the Willis-Knighton Health System. With Mr. Fielder’s extensive healthcare experience, strong track record and commitment to operational excellence, we are confident that he is the right choice to carry on our proud legacy of healthcare delivery in North Louisiana.”

Mr. Fielder joined Willis-Knighton in 1990 and built his career under the guidance and mentorship of Mr. Elrod. He has held multiple senior roles across the organization, starting with Human Resources, progressing to be the Administrator of Willis Knighton’s flagship hospital, and eventually becoming the Chief Operating Officer with management oversight of all Willis-Knighton hospitals. During his tenure he has played a significant role in the expansion of Willis-Knighton Health System. Most recently Mr. Fielder has provided critical executive leadership in response to the COVID-19 pandemic in coordination with the healthcare team and front line employees.

JafAs Willis-Knighton Health System approaches its 100th anniversary of service in our community and I approach my 57th, it is humbling to recognize that I have been privileged to lead the health system for more than half of that time. Serving these years with so many excellent doctors, nurses and support staff has been an honor because we have a shared vision and mission of improving the health and well-being of the people we serve.

In my youth I felt I might become a minister of the gospel, and although I prayed for guidance and listened, I never felt that calling from God. What I ultimately realized is that God led me here to Shreveport in 1965 for a reason. That reason was to lead this health system and support the citizens of this region as the second administrator in the hospital’s history.

I have served with the Willis-Knighton Board of Trustees for all of these decades, and have been grateful for their dedication, belief in our community, and the wholehearted support they have given to me, not just professionally but personally. When I signed my last contract several years ago, I indicated it would be my last. To assure a smooth transition, we all believe it is now time to announce Willis-Knighton’s third leader, Jaf Fielder.

Working with Jaf during the past 30 years of his career here, I have not just seen him grow and demonstrate his capabilities, I have seen his heart. His dedication to the health system, the medical staff, the employees and our community is unquestionable and, I believe, unshakable. He will have the support of a strong executive team, just as I have had, and a solid foundation on which to grow.

I look forward to working closely with Jaf, giving him an even greater depth of understanding of my duties. I consider this a privilege, a duty and a responsibility that I willingly assume. I am honored to be asked to serve on the board of trustees and to be named president emeritus of the health system.

While I will step away from the chief leadership position at Willis-Knighton September 30, 2021, I have pledged to continue to offer support in any additional ways the board and leadership consider to be appropriate. However, my wife and I are both looking forward to opportunities for travel, reading and relaxing, spending quality time with friends and family and each other, and especially enjoying time away that won’t be interrupted with health system calls and emails.

The inspirational Bishop T.D. Jakes has said: “Be willing to transition at every stage of your life. If your heart is open and you have an open mind, the blessing will flow.”

I ask our Willis-Knighton family and friends to remember that we did not achieve our position of prominence in healthcare and in this community because of one person’s efforts. We built on the dedication and sacrifices of legions of people who went before us. We willingly transitioned year after year, even in the face of this horrible global pandemic. We kept our hearts open to the needs of our community and, in doing so, we allowed the blessing to flow.

Finally, I look to this wisdom of John F. Kennedy who noted: “Change is the law of life. And those who look only to the past or present are certain to miss the future.”

I am confident that the future at Willis-Knighton is bright and that our skilled physicians and employees will continue to bring the blessings of good health to people throughout our region.