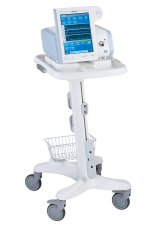 Philips has issued a recall of its V60, V60 Plus and V680 ventilators (Photo courtesy of Philips)

Philips issues another round of recalls for ventilators

by John R. Fischer, Senior Reporter
In the past year, Philips has issued numerous recalls at different times for its respiratory devices and has been forced to do so again with three of its ventilators after an issue surrounding an internal electric circuit was uncovered.

The models are the Philips Respironics V60 ventilator, the V60 Plus ventilator and the V680 ventilator, with all three labeled as FDA Class I recalls, the most serious kind. The V60 and V60 Plus are assist ventilators that augment patient breathing, while the V680 provides invasive and noninvasive respiratory support.

The issue with the circuit may cause the ventilator to cease operations and affects at least 99,283 devices, according to Mass Device. No total device number has been listed for the V680, which is distributed outside of the U.S.

The company says that on average there is less than one silent shutdown with the affected devices among one million uses per year. It does not advise customers to remove the devices from service and says they can still be used according to their instructions.

“The V60 ventilator has been in service for more than 10 years with a high record of reliability. We take every customer complaint seriously, and whenever we identify an issue, we address it thoroughly and transparently in consultation with the relevant competent authorities. We have created a dedicated team that is focused on addressing the current issue and providing technical assistance where needed,” Philips Respironics business leader David Ferguson said in a statement sent to HCB News.

In an urgent medical device letter, Philips says that providers should use an oxygen analyzer with appropriate alarm settings for each of the three devices; connect them to a nurse call/remote alarm system to have a backup signal to send to the clinician should the primary alarm system not activate; or monitor the patient with pulse oximetry or other physiological monitoring based on the patient’s needs.

Additionally, an alternative means of ventilation should be available, and if a fault is detected in one of the devices, patients should be immediately disconnected and started on the alternative option, according to the company. “If these mitigations are not available, Philips Respironics recommends each institution deliberately make a decision that balances the risks and benefits of continued use of the V60/V60 Plus and V680 against the risks and benefits of ceasing use and/or substituting other ventilators. Such decision-making should consider the institution’s capabilities and patient needs,” said the company.

Philips’ V60 and V60 Plus ventilators were previously recalled last June and deemed as Class I then as well after a software issue created the risk of reducing oxygen flow to patients in certain situations.

The FDA said the devices could result in serious injury or death and traced 61 incidents and 25 injuries back to them at the time. It said patients affected by these adverse events could require advanced medical treatment, with some cases involving a degree of hypoxemia.

In the same month, Philips also recalled millions of its continuous positive airway pressure and bilevel positive airway pressure (BiPAP) machines, which are designed for sleep apnea, when it was found that the polyester-based polyurethane (PE-PUR) sound abatement foam on them was breaking down. This allowed the foam particles to enter the device’s air pathway, which put patients in danger of potential health problems and toxic, carcinogenic effects.

As a result, the company announced that it would no longer take orders for sleep therapy systems and leave the sleep therapy market for at least a year to address the recall, according to Mass Device.

And last month, certain V60 and V60 Plus ventilators were flagged due to having parts held together by an expired adhesive. Were the adhesive to fail, parts could become loose and the ventilator could shut down. The alert pertained to 1,511 devices distributed in the U.S. from July 29, 2021 to August 11, 2021, according to the FDA.

Additionally, the agency told Philips in March that its notification efforts on the recall of its ventilators have been inadequate to date, and that it will require the company to do a better job of notifying all device users, durable medical equipment suppliers, distributors, retailers and healthcare providers who inquire about the recalls and risks associated with them.

Philips Respironics will provide regular updates to customers on the development of its plan to address the issue with the three ventilators, with the first update to be provided before June 30, 2022.