While we know that one in eight women will eventually develop breast cancer, we also know that the diagnosis in those under 40 years of age is relatively uncommon, with less than five percent of women at average-risk being affected.

However, we’re seeing an increasing number of young women being diagnosed with breast cancer. Why?

The short and frustrating answer is: we don't know. But what we do know with certainty is that compared with older patients, young women are burdened with more advanced disease and unfavorable tumors, notoriously known to increase the risk of both cancer recurrence and death. Multiple factors likely contribute to this striking difference in outcomes among age groups, however, in the absence of a known genetic mutation, we are currently unable to explain to younger patients why they are plagued by more complex and unpredictable breast cancer.

Surgery is a key component in the treatment of early-stage breast cancer. In general, options include a mastectomy, or removal of the entire breast gland and breast conservation, in which only the tumor is removed with a rim of normal tissue (i.e., lumpectomy). This goes hand-in hand with postoperative radiation therapy. In the setting of invasive disease, a sentinel lymph node procedure is also performed, in which several lymph nodes under the axilla (or armpit, for lack of a better word) are removed to check for local spread of disease.

Historically, a mastectomy was considered the standard of care in the management of patients with breast cancer. This surgical procedure is not only a longer, more extensive undertaking when compared to a lumpectomy, but is also associated with an increased risk of complications including wound infection, bleeding, and chronic pain. While it seems intuitive that removal of all breast tissue will help improve cancer-related outcomes, a large body of surgical literature supports that breast conservation is equivalent to mastectomy with respect to survival. In other words, more aggressive surgeries will not help breast cancer patients live longer. This paradigm shift from a more radical surgical approach to an outpatient procedure revolutionized the field of breast cancer, providing an opportunity to safely de-escalate surgical options without compromising the goals of cancer care.

However, there is an important caveat to consider when interpreting this information — these recommendations are based on studies that predominantly excluded young women. Which raises the question: can these conclusions be safely applied to younger patients, who we know suffer from more aggressive disease and less favorable outcomes?

The growing number of young women with breast cancer coupled with the lack of prospective data to guide their care fueled our interest in exploring the unique needs of this patient population. Under the guidance of my program director, mentor, and senior author, Dr. Lejla Hadzikadic-Gusic, I was given the opportunity to present our research at the American Society of Breast Surgeons (ASBrS) meeting earlier this year. The study was funded by the Sandra Levine Young Woman’s Program, a wonderful resource for not only patient education and support, but also for clinical researchers, providing a plethora of valuable information regarding young breast cancer patients in the form of a prospectively collected database.

The study included almost 600 women under age 40 diagnosed with breast cancer who underwent oncologic treatment, including surgery, at Atrium Health Levine Cancer Institute. Patients were followed over a five-year period. A tumor’s molecular biology provides important prognostic information; therefore, patients were stratified by hormone receptor (HR) and HER2 status. We asked the question: does type of surgery with either mastectomy or breast conservation impact overall survival in young patients with breast cancer?

Our results echoed what was found in those landmark clinical trials — more aggressive surgery does not help young patients live longer. However, a national trend toward mastectomy, and even contralateral prophylactic mastectomy (i.e., surgical removal of a healthy breast) in young patients continues to persist. Our patient cohort demonstrated a similar tendency, with 64% undergoing mastectomy versus breast conservation (36%). This is in contrast with older patients in our practice, who routinely choose lumpectomy over mastectomy if they are considered to be an appropriate candidate for breast conservation.

Why do younger patients tend to undergo mastectomy?

This motivation is likely multifactorial, including clinician and patient-related factors, as well as influences from social media.

Some providers may hesitate to apply current guidelines to younger patients, and a mastectomy may ultimately be recommended based upon young age alone. In addition, it is not uncommon for our patients to request a mastectomy during initial consultation and claim that “removing it all” will provide them with peace of mind during their breast cancer journey. While a legitimate consideration, this thought process should be carefully investigated because some patients may overestimate their risk for cancer recurrence and erroneously conclude a mastectomy confers a survival benefit. Appropriate education must be provided in this situation to avoid the unnecessary morbidity from more extensive surgical procedures.

Other patient-related factors include fear of disfigurement or decrease in breast size after a lumpectomy, as well as anxiety regarding radiation therapy and the ability to comply with the required time commitment (typically 10 minutes per day, 5 days per week for 4-6 weeks). In addition, some patients consider body image to be an important aspect of survivorship, and breast symmetry may be a priority. While this can certainly be achieved with mastectomies and breast reconstruction using implants or a patient’s own tissues, the options of breast reductions and lifts in patients choosing a lumpectomy should also be discussed. These concerns and goals of treatment are important to ascertain, as a decrease in compliance with recommended therapy and dissatisfaction with breast appearance are both associated with worse patient outcomes.

Interestingly, a paper published in the Annals of Surgical Oncology reported that the preference for mastectomy may be partially attributed to a media focus on celebrities with breast cancer and inherited genetic mutations. This shift known as the “Angelina Jolie Effect” was popularized after the actress publicly announced her decision to remove both breasts. However, Ms. Jolie was diagnosed with a pathogenic mutation in the BRCA 1 gene, predisposing her to a significantly increased risk for developing breast cancer. Mastectomies are strongly considered and even recommended in this situation; however, this benefit does not apply to patients who are at average-risk for developing breast cancer. Clinicians must be aware of the strong influential relationship that exists between social media on patient assumptions and subsequent expectations.

It is well documented that younger women are more likely to present with highly proliferative molecular subtypes (i.e., HR negative, triple negative, HER2 positive breast cancer), which are typically associated with clinically aggressive disease and disparaging long-term outcomes. Not surprisingly, our study found that compliance with hormonal therapy in patients with HR positive disease was associated with improved survival. In addition, we also found that black race was associated with an almost six times increased risk of death in the triple negative sub-group. This is consistent with previous studies showing an increase in breast cancer burden in black women when compared to white women, representing one of the most notable examples of disparities in oncology that is related to racial identity. This finding emphasizes the need to focus attention on racial outcome disparities in young women, with future studies improving upon the representation of minorities in breast cancer research.

Our recent study adds to the literature by providing data from a relatively large cohort of patients in a prospectively collected database. We found that even though survival outcomes do not differ between mastectomy and breast conservation in young women with breast cancer, younger women tend to undergo more extensive surgical procedures. In addition, other recent studies demonstrate young women who choose breast conservation report higher rates of breast satisfaction, psychosocial and sexual well-being. This discrepancy highlights the critical importance of counseling regarding outcomes and the potential long-term impact surgery may have on a patient’s quality of life.

The care of young women with breast cancer is multifaceted and demands a team of experts across disciplines. These women face unique challenges during breast cancer treatment including premature menopause, impaired fertility, and the psychosocial consequences resulting from prolonged survivorship. We recognize that the decision regarding surgical approach is complicated, and treatment should be individualized based upon the consideration of multiple factors. Our goal is to provide these women with evidence-based recommendations, while empowering them to participate in their own cancer care. 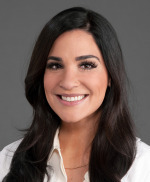 Dr. Christine V. Pestana
Ultimately, final decisions should be the result of shared decision-making, with a focus on oncologic safety and quality of life. We are on a mission to encourage proactive treatment and to offer the most advanced multidisciplinary approach to breast cancer patients. We hope to influence young women with breast cancer in our immediate community, and ultimately, those who live outside the Levine Cancer Institute footprint.