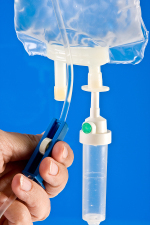 An anesthesiologist has been accused of tampering with IV bags that led to the death of a doctor and injured several patients.

Dr. Reynaldo River Ortiz Jr., 59, was arrested on September 14 in Plano, just days after the Texas Medical Board temporarily suspended his medical license.

He is accused of tampering with IV bags that caused at least seven patients and possibly more between May and August to experience respiratory distress and cardiac arrest during routine surgeries, according to ABC-affiliate WFAA/Channel 8.

A colleague, Dr. Melanie Kaspar, 55, died after taking one of the bags home in June to treat herself for dehydration. Upon inserting the IV, she “almost immediately had a serious cardiac event and died,” according to the board’s suspension order.

At his suspension hearing on September 9, the board called Ortiz “a continuing threat to public welfare” after video showed him putting IV bags in a warmer outside the operating rooms. “When he deposited an IV bag into the warmer, shortly thereafter a patient would suffer a serious complication,” said the board.

The Dallas County Medical Examiner attributed Kasper’s death to an accidental overdose of bupivacaine, an anesthetic that can be toxic if entered into the bloodstream. It has since reopened her case.

The drug was also present in the warmer IV bags, which had tiny holes in the plastic. Tests on the contents of one for another healthy patient who suffered a cardiac event found similar drugs.

"We have credible information to believe that over the course of several months between 10 and 15 patients of the surgery center experienced a life-threatening medical crisis soon after receiving an IV bag,” said Don Tittle, the attorney for Kaspar’s widower, John.

Attorney Bruce Steckler is representing the seven patients who experienced reactions and said they were all healthy “but found themselves being rushed to a major hospital because they had to be intubated and ventilated because they suffered respiratory distress and cardiac arrest."

In a statement, Baylor Scott & White said it became aware on August 24 of a potentially compromised bag and paused all operations and notified local and federal authorities before closing for the remainder of the day. “We actively assisted authorities in their investigation and will continue to do so. We also remain focused on communicating with patients."

The Texas Medical Board said it found out about the death of a patient from possible IV bag contamination from media reports, and was tipped off by federal authorities. It immediately set up an emergency suspension hearing for Ortiz.

It did not disclose when Baylor Scott & White informed it about the life-threatening events. Ortiz was no longer a member of the medical staff there at the time when his license was revoked, said Baylor Scott & White, which has set up a dedicated phone line for patients with questions.

Ortiz was disciplined by the board in 2018, and recently in August 2022 for failing to perform cardiopulmonary resuscitation on an anesthesia patient. He also has previous convictions for animal cruelty, assault and bodily injury, and an emergency protective order against him.