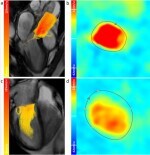 Researchers at the University of East Anglia, in the U.K., say that 4D flow MR produces precise images of heart valves and blood flow in less than half the time of standard 20-minute MR scans and poses less risk than invasive methods commonly used to make diagnoses. The title of their study is, Kat-ARC accelerated 4D flow CMR: clinical validation for transvalvular flow and peak velocity assessment.

It also is more reliable than echocardiography for measuring the peak velocity of blood flow through the mitral valve of the heart, according to lead researcher Dr. Pankaj Garg, from UEA’s Norwich Medical School and an honorary consultant cardiologist at NNUH.

"Its clinical applications include the assessment of valvular heart disease in the first instance. In addition, we are now able to recognize abnormal aortic flows, which potentially play an important role in reducing aortic compliance and hence reducing the overall efficiency of the cardiovascular system," he told HCB News.

When applied to scans for 50 patients with suspected heart failure at the Norfolk and Norwich University Hospital (NNUH) and the Sheffield Teaching Hospitals NHS Foundation Trust, they found that the approach measured peak velocity of cardiac blood flow accurately and precisely, and cut scanning time by more than half.

"I am sure 4D flow-mapped flow abnormalities will become new targets for therapy in the future — especially in aortic valve intervention," said Garg.

Funding was provided by the Wellcome Trust.

The findings were published in September in European Radiology Experimental.